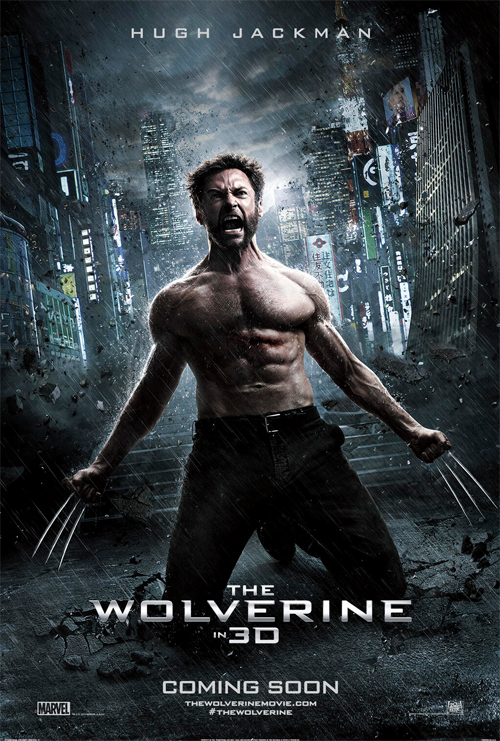 I can’t say I had high hopes for director James Mangold’s “The Wolverine”.  I thought “X-Men Origins: Wolverine” was pretty terrible, and I knew the latest film about the clawed hero would be more of a follow up to “X-Men 3” rather than the prequel, but I hoped a better film would be made. I will say this, “The Wolverine” is vastly different in tone and style than any other X-Men related film, but it is also the most dull.

It’s been several years since Logan (Hugh Jackman) parted ways with his fellow mutants after taking the life of the woman he loved, Jean Grey (Famke Janssen).  Jean haunts Logan’s dreams and makes it impossible for him to move on.  Logan is now living a solitary life in the woods among other animals. We see him walking along side a grizzly early  in the film, as if they were neighbors passing each other by.

When a young Japanese girl named Yukio (Rila Fukushima) comes looking for Logan, she tells him that her employer is on his death bed and his one wish is to say his goodbyes to the man who saved his life many years ago.  Logan honors the dying man’s wishes and heads to Japan to pay his respects.  Unfortunately there is something shady going on with the family and of course Logan has to get in the middle of it.

None of my issues with “The Wolverine” have anything to do with the character himself. Jackman is always great in the part and I will be bummed when the time comes to recast. The problem is how extremely boring it is.  Aside from a couple great action sequences, one which includes a fight on top of a bullet train (which looks much cooler than the trailers let me to believe) and a night time fight between Logan and a group of rooftop ninjas.  Between those great moments, is a whole lot of nothing-special.  I think it’s time to give up on these solo X-Men outings and focus on the team films.

I am sure fans of the character will ignore my thoughts and go see the movie anyways. If must go see “The Wolverine”, then at least save your money and don’t waste it on the pointless converted 3D.  Also stay for the stinger scene mid-way through the end credits because it’s the best moment in the whole film.