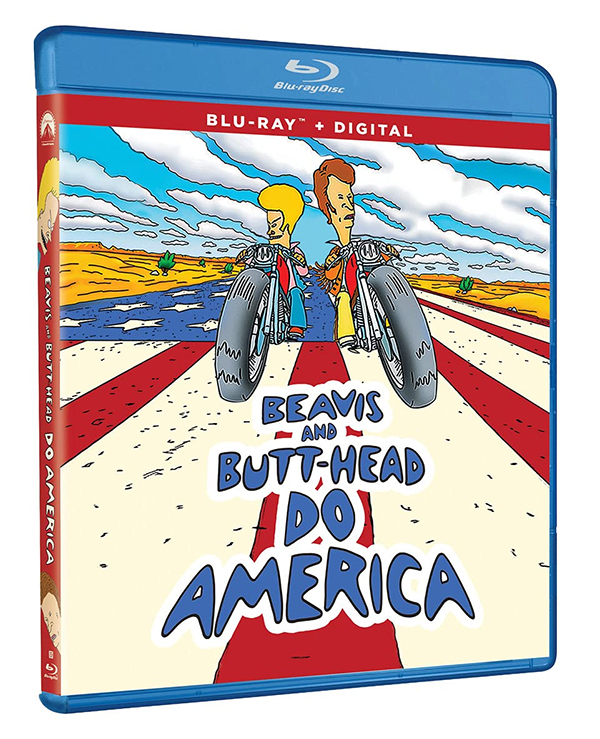 One of the things I always enjoyed about Beavis and Butt-Head Do America is that Judge does not try to improve or update the animation style in any way for the big screen. Essentially, the feature film just feels like an extended episode of the series, though it is had the luxury of being a tad more offensive. However, it sticks to its’ “PG-13” limits. I do wish that they could have pushed for an “R” rating, but I am sure the studio wouldn’t have been too keen on limiting their audience, especially when their key demographic was 13-17-year-olds.

The story centers on Beavis and Butt-head waking up from a nap to discover their television has been stolen. While on the search for a new TV or at least a place to watch TV, they stumble into a motel room in which a drunken Muddy Grimes (voiced by Bruce Willis) mistaken them for a couple of young hitmen. He tells the boys that he will pay them $10 thousand to do his wife who is hiding out in Las Vegas. Muddy means for them to kill her, but they think he is willing to pay them to have sex with her.  With that money they could buy a new TV, but they could also finally score for the first time. The boys do make it to Vegas and meet up with Muddy’s wife Dallas (voiced by Demi Moore) but she uses their utter stupidity against them and turns them into a mule by sewing a stolen chemical weapon into Beavis’ shorts.

Beavis and Butt-Head Do America is exactly what the title suggests, it is the dim-witted teems on a cross-country trek trying to score while unknowingly carrying a deadly biological weapon with them. They have no clue that they are now the most wanted criminals in the country and FBI Agent Flemming (voiced by Robert Stack) is hot on their trail, leaving a long line of deep cavity searches behind him.

It would be easy to say that some of the humor here would not be acceptable if made today, but at the same time, the whole idea behind Beavis and Butt-head is to be offensive, so I am not sure how to really comment on that. The show and the film are purposely wrong.  Beavis and Butt-Head Do America hasn’t aged that poorly and some of the humor still works, while other aspects of the film do not. Fans however will be pleased to finally have this on in HD.