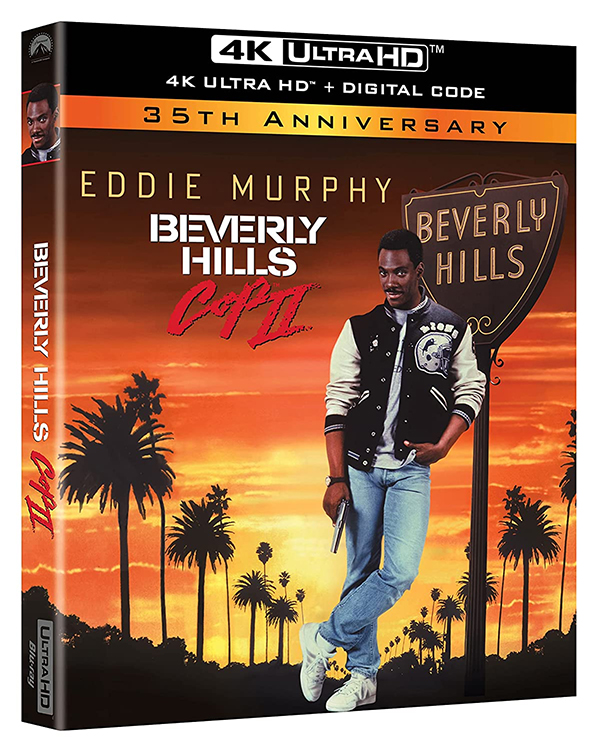 Arriving on 4K UHD just in time for its’ 35th anniversary is Tony Scott’s Beverly Hills Cop II. While thee 1987 sequel doesn’t deliver as many laughs as the 1984 original, it still managed to be a worthwhile follow-up. The action is ramped up and more time is given to Judge Reinhold and John Ashton as Axel Foley’s Beverly Hills sidekick Detectives Billy Rosewood and John Taggart. The chemistry between the three has always been fun, but the added time is a definite plus. Rosewood’s firepower obsession is a great running joke throughout the film. Beverly Hills Cop II also moves along at a brisk pace. If Beverly Hills Cop IV can be as entertaining as Part II is, then I will be happy.

Wise-cracking Detroit Detective Axel Foley (Eddie Murphy) returns to Beverly Hills when he learns that his friend Captain Andrew Bogomil (Ronny Cox) has been gunned down and now in critical condition. Detectives Rosewood and Taggart are both by Bogomil’s side. They have also been ordered to stay off the case. Of course, Axel has no plans to step aside, and he convinces Rosewood and Taggart to help him solve the case that got their friend and colleague shot.

Maxwell Dent (Jürgen Prochnow), the business-owner who is actually behind the Alphabet Crimes is not-to-thrilled about the cops getting closer to figuring things out, doesn’t hesitate to put a hit on Axel and his friends. However, it also doesn’t help Dent that his right-hand in all of this Karla Fry (Brigitte Nielsen), who happens to stand-out in a crowd. If you are being robbed at gunpoint by a 6 foot tall supermodel, you are going to have no problem recognizing her. Of course, director Tony Scott didn’t have much care for logic here. He wanted everything to look flashy and stylized and he succeeded.

Beverly Hills Cop II is in no way a great movie, but it is a fun 80’s actioneer that delivers a handful of laughs and an extremely likable Murphy. Paramount has done another incredible job with their 4K remaster which is presented in 2160p/ Dolby Vision. If you were happy with the 4K release of Tony Scott’s Top Gun, you are going to be hard pressed to find anything to complain about here. From the orange sky over the oil fields to the urban locals such as Detroit and Los Angeles, the film has never looked cleaner and sharper. Axel’s bright red Ferrari really pops in the film’s first act. For the audio, the DTS-HD 5.1 Audio has been ported over from the 2020 Blu-ray and it definitely does the job, especially when Bob Seger’s hit Shakedown comes blasting on. There is also plenty of action and car chases in which the audio soars. If you are a fan of Beverly Hills Cop II, I recommend grabbing this release.