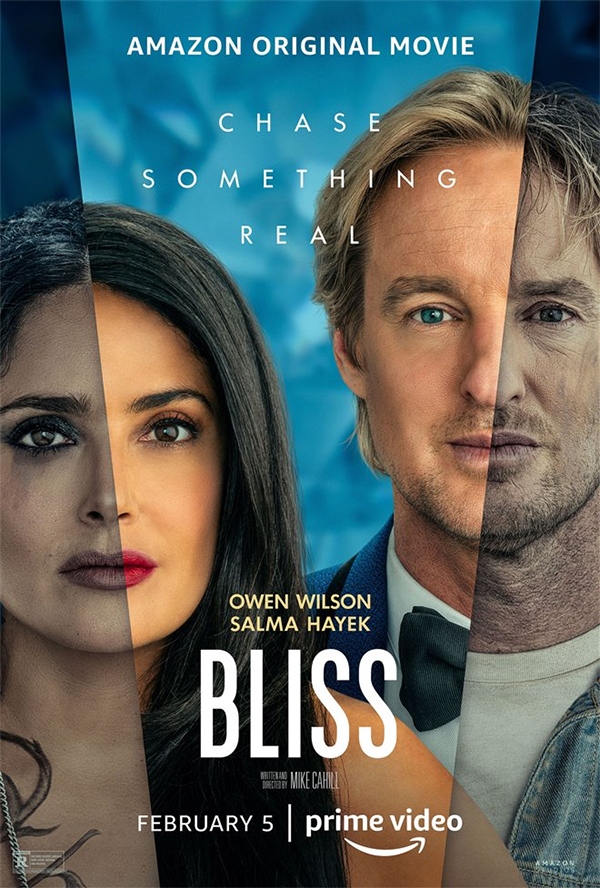 Imagine if 1999’s The Matrix was a slow and tedious, sci-fi, romantic-drama. That is basically what writer/director Mike Cahill’s Bliss, starring Owen Wilson and Salma Hayek feels like. The filmmaker behind Another Earth and I Origins clearly loves to blend science and romance in strange and original ways, but I have never been able to connect with his work.

Greg (Wilson) seems to not be living a happy life. He has just been fired from an IT call center job that he obviously doesn’t like but his employment termination went worse than most since he accidentally killed his former boss during the firing. In a panic, Greg hides his boss’ body against a window, but behind a curtain and he vacates the building, running across the street to get a drink. This is where he meets Isabel (Hayek), who apparently has been waiting for him. She explains to Greg that the two of them are real people and everyone else in this particular world is a simulation. This includes Greg’s children Emily (Nesta Cooper) and Arthur (Jorge Lendeborg Jr.). Isabel also tells him that he is her guy in the real world.

The first half of Bliss sees Greg and Isabel wandering the city streets of the virtual world, taking a yellow drug that gives them the ability to manipulate the people and environment around them, essentially super-powers. The first half of Cahill’s story is mildly interesting but when the character’s exit the virtual world and return to the paradise that is the real world, things get downright dull.

I was having difficulty trying to figure out if Bliss was trying to tell a story about addiction or other issues revolving the human condition. The message was never quite clear to me and maybe that is what Cahill was going for. The cast is fine but even they couldn’t help me get invested in their characters. Bliss does feel ambitious, but just doesn’t come together.