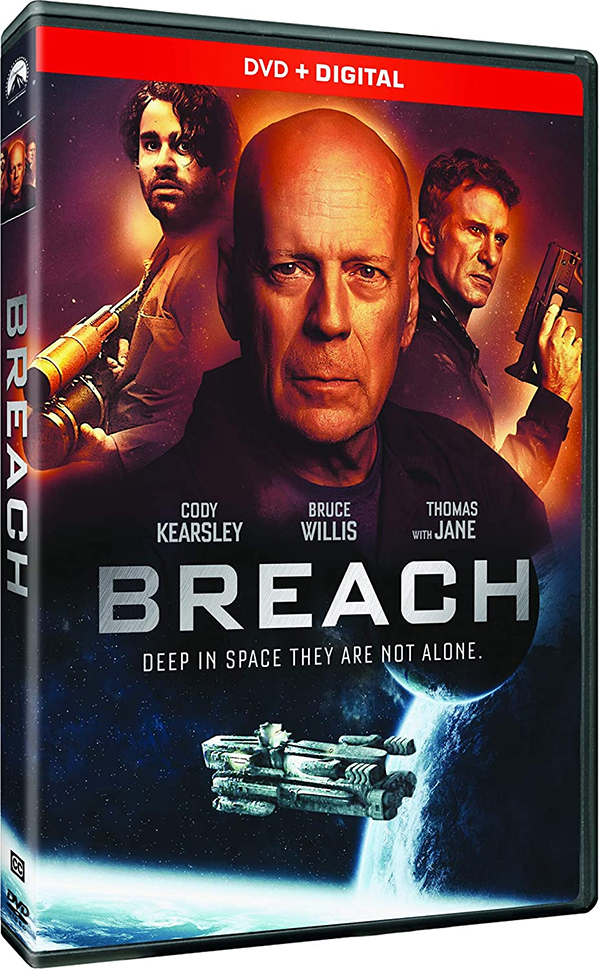 In the last five years, one-time mega-star Bruce Willis has featured in at least a dozen low-budget straight-to-video/streaming action films. I have seen two of them, including the sci-fi/thriller Breach, which arrives on DVD this week. Willis’ latest film was directed by John Suits, who not only helmed that very cool Die Hard commercial last year but also the fun 2016 first-person zombie flick, Pandemic. Given that I love sci-fi horror and still believe Willis does have the ability to carry a film, I had some hope for Breach. Although, not terrible, there isn’t a whole lot here I can recommend.

Things begin with 300,000 selected people boarding a spaceship called the Ark that will take them away from the dying Earth to a colony on a new planet where humans can rebuild. Noah (Cody Kearsley) was not selected, but he impersonates a junior janitor, so that he can be with his pregnant girlfriend Hayley (Kassandra Clementi), who happens to be the daughter of the ship’s Admiral (Thomas Jane).

Noah’s superior on the Ark is Clay (Bruce Willis). There isn’t much to his character other than being older, experienced and a bit of a drinker. This is the type of character Willis plays well and he helps keep things somewhat entertaining. Unfortunately, I can’t say the same for Kearsley, who I liked in the unfortunately canceled-too-soon Netflix series, Daybreak. He brings nothing interesting to his character. He is clearly trying to deliver some energy, but it just doesn’t seem to work.

Breach is pretty much a mash-up of Alien, The Thing and Night of the Creeps. It borrows different elements from much better films and sometimes it works, but most of the time it doesn’t. Given the small budget, the interior of the Ark looks very much like a small set that has been mostly painted grey. The location never feels convincing. Some of the best moments in Breach are when Willis is front and center, taking control. To the actor’s credit, he makes the film watchable. If you are a fan of the Die Hard star, you may want to give this one a look but don’t expect much.