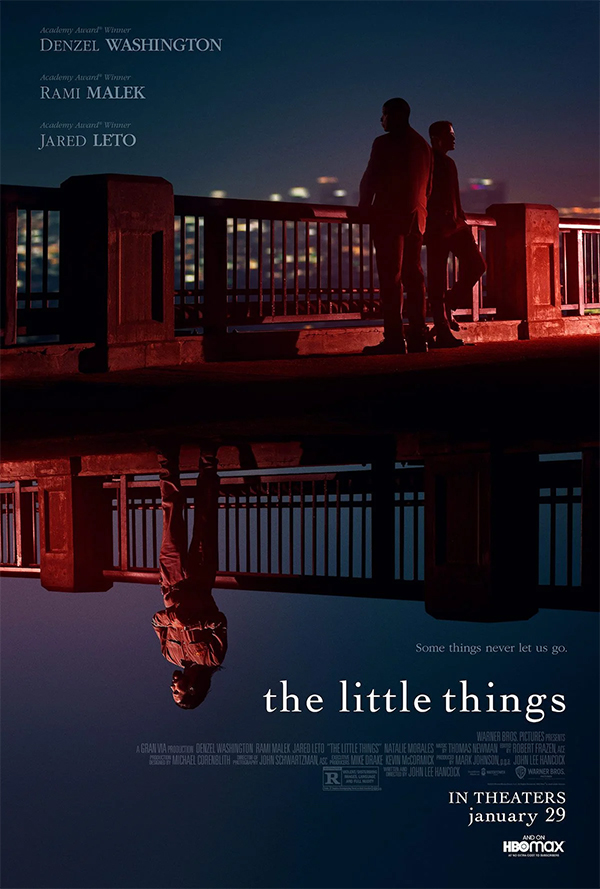 John Lee Hancock’s screenplay for The Little Things has been around for nearly three decades. Steven Spielberg passed before making its’ way through a string of high-profile actors-turned-directors like Clint Eastwood, Warren Beatty and Danny DeVito. Hancock finally took it upon himself to direct his own psychological thriller and he pulled together a top-notch cast that includes Denzel Washington, Rami Malek and Jared Leto. I am a big fan of this genre, especially when it comes to films from the 90’s like The Silence of the Lambs, Seven, Basic Instinct and Kiss the Girls. I had high-hopes for this 90’s set thriller and although the cast does a fine job with the material they are given, The Little Things does not offer anything fresh or even all-that-interesting. It is a film that contains several fine moments. However, it doesn’t amount to much in the end.

Former Los Angeles Detective Joe ‘Deke’ Deacon (Washington) left the big city years ago and took a job as a Deputy in the much less populated Kern County. He now lives a much less stressful life. Instead of solving murders, he now solves minor vandalism cases, like broken restaurant signs. All in a hard day’s work. When Deke’s commanding officer assigns him a trip to Los Angeles to pick up evidence for a local case, he doesn’t seem all-to-thrilled about paying a visit to his former colleagues. Although, we don’t know the reason why at the beginning his former captain and fellow officers are not a fan of seeing Deke again, it is something we learn about as the story progresses.

Deke does have at least one friend left in the department, Detective Sal Rizoli (Chris Bauer), but he pretty much gets the stink eye from everyone else. Young detective Jim Baxter (Malek) is the one who pretty much took Deke’s place when he left and he actually takes an interest in the former L.A. cop. Jim knows of Deke by reputation alone and feels that he might be able to give some pointers on a case that he is currently working on.

It doesn’t take long for Deke to figure out that the string of young women murders that Baxter is trying to solve, is somehow connected to the case that he was working before leaving the city. Deciding to take his two week vacation from work to solve these crimes in Los Angeles may not seem like a normal way to unwind, but Baxter has very little problems with getting the assistance from Deke.  Their prime suspect is an ultra-weird appliance repair man named Albert Sparma (Leto) who is by far the least believable character in the film.

The Little Things first 40 minutes are quite promising. We get introduced to the main players and learn just enough about each character to maintain a level of mystery needed for a psychological thriller. Hancock also delivers a very slick looking film. The problem here is that as the story begins to unravel and the pieces are beginning to come together, the less interesting it becomes. The Little Things has little moments here and there but none of them come together in a way that grabbed my attention. Washington’s performance does elevate things a bit but I felt like I have seen him play this character before.

If you like the cast, it may be worth checking out on HBO Max if you have a subscription, but this isn’t one I can recommend you brave the theater for.