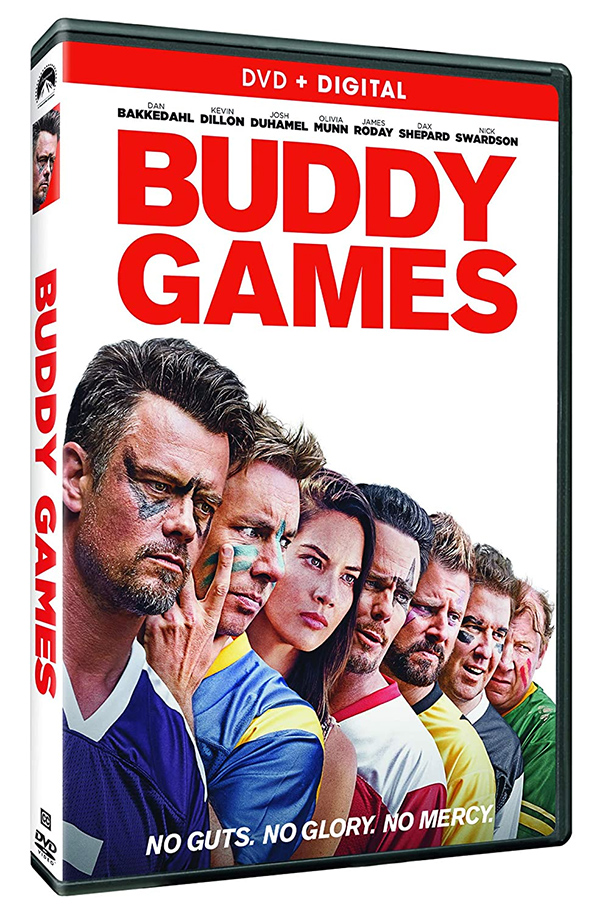 You know all of those terrible comedies that Adam Sandler produced for his friends in the early part of the 2000’s? You know, the ones that the Sandman chose not to be in himself?  Well, actor Josh Duhamel makes his writing and directing debut with Buddy Games, a film that feels like a product of that time but is even worse.  Sandler has absolutely no connection to this film, but long-time collaborator and friend Nick Swardson is all over this unfunny and outdated dumpster fire.

Buddy Games centers on a group of longtime friends/man-children who would get together each year to put on an extreme sporting competition in which part of the goal was to humiliate each other.  There is Durfy (Dax Shepard), an unsuccessful would-be actor, Doc (Kevin Dillon), a not-so gifted chiropractor, Bender (Nick Swardson), who recently lost his mother and is flat broke, there is Zane (James Roday), a tanning salon operator and Shelly (Dan Bakkedahl) who lost both his testicles five years earlier after Bender shot him in the scrotum.  They are all led by the Bobfather (Josh Duhamel), who happens to also be the most successful in the group.

The best way I can describe Buddy Games is that it is a mix of the film’s Tag and Grown-Ups. Neither of those I would consider great comedy but this one scrapes the bottom of the barrel when it comes to what Duhamel considers funny. Riddled with jokes involving laxatives, drinking semen, and characters who supposedly care about their friends, while treating each other like trash. There isn’t a single funny moment in Buddy Games. In all fairness, it did seem like the cast was having the time of their lives making this thing. If that is the case, good for them. Still, that isn’t reason enough for you to waste 90 minutes of your time watching it.