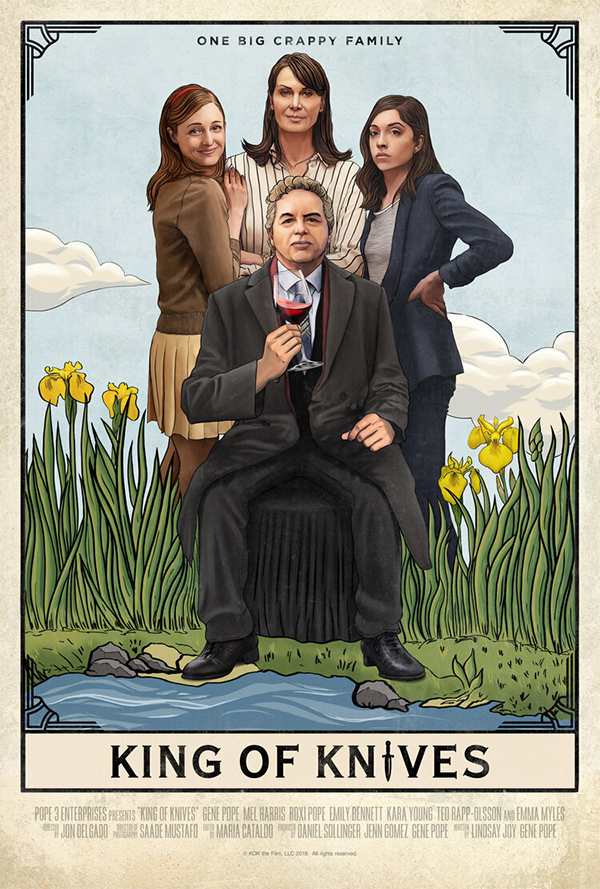 After working on film sets for 25 years in different capacities, Jon Delgado makes his directorial debut with the dramatic-comedy King of Knives. Co-written by the film’s star Gene Pope and first-time screenwriter Lindsay Joy, this could be an interesting alternative to the cookie-cutter Christmas-set movies being dumped on us by the Lifetime Network and Netflix.

Frank (Gene Pope) and Kathy (Mel Harris) are celebrating their 29th anniversary during the holidays and what could be better?  Well, almost anything else since their family is on the brink of imploding. Frank has not been a faithful husband over the years and a young hotshot at the advertising firm which he works has been taking over his clients.  Frank is also suffering from a mid-life crisis. Kathy has been keeping up a strong front but that can only last for so long. Their daughters Kaitlin (Roxie Pope) and Sadie (Emily Bennett) are also not in the healthiest of mind states. Kaitlin is gay but has never come out to her father. Much of it has to due with her brother who was also gay and committed suicide. This of course still haunts Frank since he was unable to accept his son for who he was (Did I mention this is a comedy?). Sadie is not doing any better as she has been in a long-term relationship with a guy she clearly doesn’t love (or even like).

Despite King of Knives dealing with some downbeat ideas, this is still a mostly upbeat film, which doesn’t always quite work.  Still, this is still a mildly entertaining film with a few memorable supporting performances from Roxi Pope, Justin Sams who plays a free-spirited tarot card reader and Kara Young who plays Kaitlin’s love interest Darla. Some of the best moments in the film come from these characters. I also liked some of the moments between Frank and Kaitlin which at times feel like some of the most honest. King of Knives is a decent indie film where a little more thought was put into the script than most holiday set films. Still, it may not be for everyone. If you want your comedies funny or your dramas dramatic, this doesn’t succeed all that well at either, but thankfully it does give us some interesting characters for us to spend 95 minutes with.