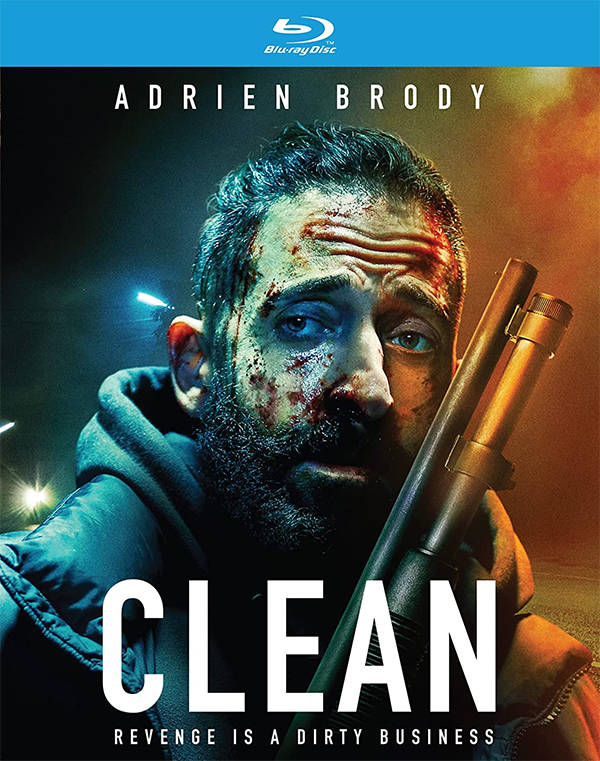 In 2017 writer/director Paul Solet gave us the thriller Bullet Head which starred Adrien Brody, John Malkovich, Rory Culkin and Antonio Banderas. That was an impressive cast to gather for what was basically a killer dog in a warehouse flick. While not very memorable, it was still entertaining. Solet reunites with Brody for Clean, an urban crime-thriller that lacks originality but manages to get by on atmosphere, style and a strong performance from its’ star who also co-wrote the film.

Clean (Brody) is a garbage man who is tormented by his violent past. We know very little about his history as the film begins, but we do learn that he lost his daughter. Clean lives a quiet and mostly isolated life. When he is not picking up trash, he is cleaning and repairing things people throw away, like a vintage vacuum cleaner. He then sells these items to Kurtis (RZA), who owns a local pawn shop.

The only person Clean shares a connection with is his teenage neighbor, Dianda (Chandler DuPont). He brings her lunch to take to school each morning and tries to look out for her, like a father. Clean isn’t too thrilled with the company Dianda is keeping and just before she is assaulted by a group of guys, Clean grabs his trusty wrench and beats them all to hell. A terrible situation gets so much worse, when the garbage man realizes that one of the kids disfigured with his tool was Mikey (Richie Merritt) the son of a vicious crime boss (Glenn Fleshler).

Now, Clean and Dianda have a target on their backs with the crime organization and the crooked cops on their payroll out for blood. Realizing that running won’t protect the girl, Clean must do what he does best, take out the trash and face his past while doing so.

Brody had his hands in almost every element of Clean. Aside from starring and co-writing the film, he also produced and scored it. It is obvious that this was a passion project, and he does give it his all. It’s just unfortunate that there isn’t much there in terms of story. Still, I did like Clean for the most part and Solet delivers the bloody goods in the final act. If you are a fan of Brody and like crime-thrillers, you may want to check this one out.  Clean arrives on Blu-ray this week.