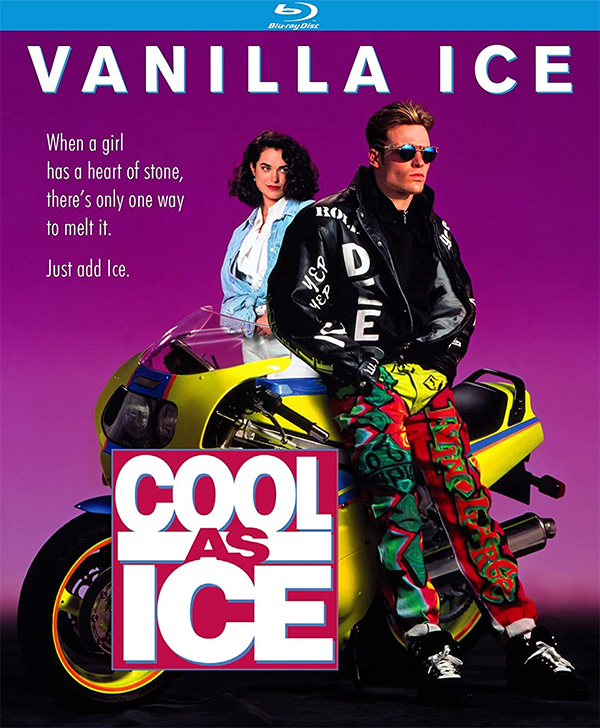 In the early 90’s, Vanilla Ice was a rap music megastar. His hit song Ice, Ice Baby helped makes him a household name. Of course, his record label wanted to capitalize on Ice’s fame, so they thought what better way to do that, then to give him his own movie. What kind of movie do we get that was built around a rapper who can’t act? Not a good one, to be sure. Cool as Ice was a critical and financial flop and the music artist’s fame was dwindling around the time of the film’s release which didn’t help matters.

Cool as Ice starts off with Johnny (Ice) and his DJ and dancers, hopping on their motorcycles after performing at a show. They drive all night, until Jazz (CB-4’s Deezer D) has some mechanical issues with his ride. The crew are forced to hang out in a small town while the bike is repaired. As soon as they arrive in the town, Johnny takes a liking to Kathy (Kristin Minter), who happens to already have a boyfriend, the local popular kid, Nick (John Newton). Of course, she is going to fall for Johnny anyways. I will admit, one of the best corny lines of all time is  spewed here when Johnny tells Kathy to “Drop that zero and get with the hero”. Is is classically bad, but absolutely unforgettable.

Obviously, a simple romance just won’t do for Vanilla Ice. There needs to be some danger to show how much of a badass he can be. So, Johnny doesn’t just beat up Nick and his friends (deservingly, so), but it turns out that Kathy’s parents are in the witness protection program and her father’s dangerous past has come back to collect.  Of course, Johnny will be saving the day.

Cool as Ice is predictable and I have a feeling the actual trained actors, like Michael Gross who plays Kathy’s father, were not all that thrilled being in a film where the lead has absolutely no acting talent.  If I can think of a single positive thing to say about Cool as Ice, I would say that it is definitely, a very well shot terrible film.  That is thanks to Janusz Kaminski who would wind up going on to work with Steven Spielberg on numerous features, including being the cinematographer on the upcoming West Side Story remake. As for director David Kellogg, he would go on to denounce Cool as Ice.

For fans of Vanilla Ice, Cool as Ice arrives on Blu-ray for the very first time and if you like it, I will say that the transfer looks great. What stands out the most are some of the wide shots that take in the location, especially in the desert scenes. The colors, pop, especially when looking at Ice’s 90’s-centirc airbrushed jeans. Also, the soundtrack is another strong area for the disk. Although I have no desire to blast Vanilla Ice music on the regular, the film’s opening song is catchy and might even get stuck in your head for a bit. I can only recommend Cool as Ice for the fans.