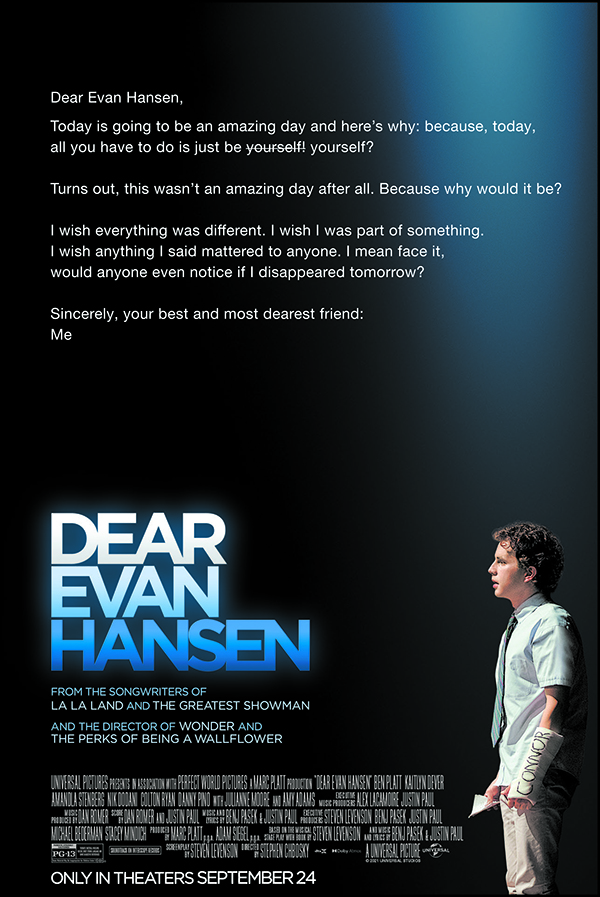 I am a huge fan of Stephen Chbosky’s 2021 high school drama The Perks of Being a Wallflower. It was actually one of my favorite films of that year and probably my favorite film about teenagers of the last two decades. Because of this, I was looking forward to seeing the director head back in that direction to bring another story about a teen with emotional issues trying to deal with finally being noticed. While Dear Evan Hansen does explore some similar issues, it does suffer from several glaring issues that are impossible to look past.

Dear Evan Hansen is the film adaptation of the award-winning musical about a teenager that suffers from Social Anxiety disorder, that finds himself in a problematic situation.  As an assignment from his doctor, Evan (Ben Platt) must write a series of letters to himself, which are supposed to help with his disorder. Fellow student, Connor Murphy (Colton Ryan) also suffers from emotional issues and like Evan doesn’t really have any friends. Evan does have one friend in Jared (Nik Dodani), but their friendship is more due to family friends than anything else. The difference is that Connor is aggressive, ill tempered and seems to push everyone away, whereas Evan is afraid to talk to people.

When Connor commits suicide, his parents Cynthia (Amy Adams) and Larry (Danny Pino) are led to believe that Evan was their son’s only friend. This is because they found one of Evan’s letters in their pocket, in which he took when he saw that Evan was into his sister Zoe (Kaitlyn Dever). In reality, Evan and Connor had only a couple of brief encounters and both of them involved Connor yelling at Evan. So, they were definitely not friends. However, when Cynthia and Danny invite Evan into their lives in hopes to learn more about the son they felt they never really knew, Evan could not find the strength to come clean and continues to dig himself deeper in deceit, while also getting closer to the girl he cares about.

As mentioned before, Dear Evan Hansen has multiple issues. The biggest one is the hardest to swallow.  Star Ben Platt was the lead in the stage musical and has gotten rave reviews for his performance. However, at age 27 he just looks out of place in the role. Keep in mind he played a college student nearly a decade ago in Pitch Perfect and we are now supposed to believe he is a high senior? It is especially noticeable when most of the other kids around him look nearly 10 years younger. Another issue I had which won’t be a problem for anyone who hasn’t watched Netflix’s A-Typical but Jared Kalwani is essentially playing the exact same role in this film that he did in that show. I am not just talking about being the smart-ass best friend, but being the smart-ass best friend to a person with an emotional disorder, that seems to be the only person who knows how to relate to the main character.

Dear Evan Hansen isn’t a High School Musical. There aren’t any dance numbers, except for maybe a-brief-moment in Evan’s imagination. It is emotionally manipulative but to be honest, that doesn’t really bother me.  I felt the songs were good, but not memorable. You will most likely not find yourself getting any of the musical pieces stuck in your head like with In the Heights. One of the film’s strongest performances would come from Julianne Moore who has a minor but important supporting role as Evan’s mom. Heidi Hansen’s interactions with her son feel the most genuine.  I am-able-to find quite a bit to like in almost every modern film musical, even the ones that are notoriously bad like Grease 2 and Rock of Ages. Dear Evan Hansen is no exception. Despite the age problem, Platt does a commendable job, even though he looks like an evil mad scientist during some musical moments when his eyes bulge out of his head. Seriously, I would like to see him play a villain in a Marvel or DC movie. Again, I liked most of the songs while watching even though I can barely remember them. If you are someone who loves musicals, I would recommend giving Dear Evan Hansen a watch, but there definitely isn’t any urgency to do so in a theater.