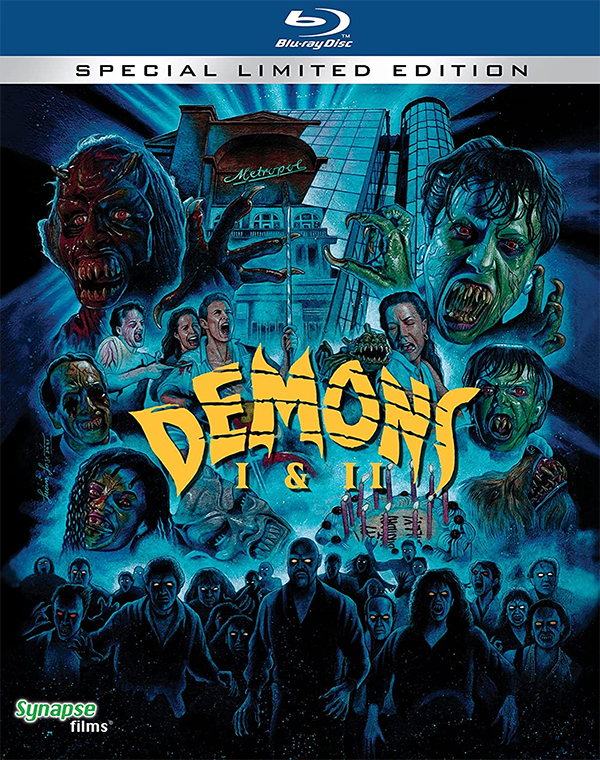 Now available from Synapse Films is the highly anticipated Limited Edition release of Demons 1 & 2 which is available in either 4K UHD or Blu-ray. We were sent the 2-disk Blu-ray for review, which is part of a limited 6000-piece run. Admittedly, Italian horror is not always my cup of tea. Yet, Lamberto Bava and Dario Argento’s 1985 demonic gorefest, Demons struck a cord with me more than 30 years ago and I have remained a fan ever since. It’s funny how up until now, I never actually owned a physical copy of the film.

The original Demons is mostly set in a movie theater where people have been invited to attend a sneak preview of a mysterious new horror film. College student Cheryl (Natasha Hovey) is given an invitation to the screening by a creepy guy in a metal mask that is following her at the train station. She assumes that he is an actor from the film, using the scary disguise as a promotional gimmick for the film. Excited about going to see the film, she invites her friend Kathy (Paola Cozzo), who hates horror films to be her plus-one.

In the theater lobby a prostitute named Rosemary (Geretta Geretta) scratches her face while trying on a demonic mask. Unfortunately for her, that scratch leads to a full demonic transformation and when she attacks her fellow prostitute, we see the domino effect, which turns half the audience into monsters and the other half fighting to survive. Rosemary’s pimp, Tony (Bobby Rhodes) is easily the most entertaining character in the film, which is most likely why despite what happens to him in this film, the actor is brought back for the sequel to play another character (reminds me a bit of Return of the Living Dead Part II).

Demons is a great deal of fun. I love the movie theater setting and the make-up effects are simply fantastic. When a person is transforming into a demon, we see their human teeth being pushed out of their gums, to make way for the massive demon fangs and it looks glorious.

While Demons 2 lacks the same spark of the original, the quickly produced sequel still manages to be an adequate but sub-par follow-up. While not being much more than a retread of the first film, Bava and Argento change up quite a few of the rules established the first time around. This time contact with demon blood can transform a person, rather than just a bite or a scratch. Another big change is that the blood can now eat through metal and concrete, which is how so many people in the new apartment building setting are transformed. Aside from that it’s basically people running from demons in a big building again. Still, Demons 2 does deliver on the gruesome goods and still manages to be fun if you don’t watch it back-to-back with the first film right away. Thankfully they brought back Bobby Rhodes who injects a great burst of much needed energy as the personal trainer in the building’s gym.

While I would have loved to get my hands on the 4K release, I will say that this new Blu-ray looks and sounds incredible. Taken from a 4K scan of the original 35mm camera negative, Demons has never looked better. Much of the film has always been darkly lit due to the theater setting, but it’s the details that really stand out. The demons look incredible with the orange eyes and pulsating veins, plus we can’t leave out the richness of the gallons of blood on display. The new scan of Demons 2 is just as impressive and may stand out a little more over the first film due to having more scenes that are lit better. The uncompressed 5.1 DTS-HD mix on both films absolutely pop, especially when sporting the killer rock soundtrack.

As for bonus features, these is so much packed into this release. For Demons, we get the full-length International cut in both English and Italian as-well-as the shorter U.S. version.  Included is also a reproduction of the original movie ticket from Demons and a Demons 2 birthday party invitation, plus a fold-out poster of Demons artwork from Wes Benscoter. See below for a full rundown of bonus content.  If you are a fan of Italian horror or even just the two Demons films, I highly recommend picking up this release 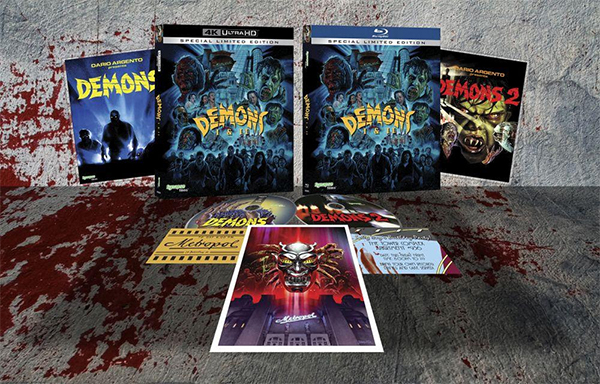