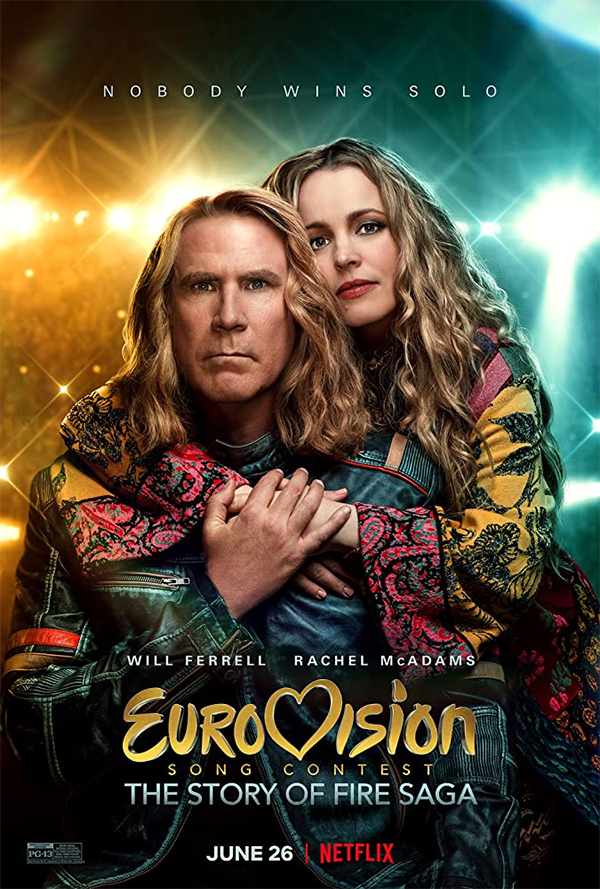 Admittedly, before having watched the new Will Ferrell and Rachel McAdams comedy, “Eurovision Song Contest: The Story of Fire Saga”, I had no clue that Eurovision was an actual annual international song contest. Essentially, “The Story of Fire Saga” is a two-hour promo for Eurovision. Truthfully, the fact that the film is centered around a real live contest doesn’t affect the plot, as things would most likely be nearly the same no matter if the contest was real for fictional.  What really matters, is if the comedy delivers on the laughs? The answer is, definitely, not. Will Ferrell hasn’t made me laugh since “The Other Guys” in 2010 and that was a decade ago. It has been become clear to me that the comedic actor’s humor is more effective when he is a smaller part of a larger cast of main characters (Like in “Anchorman” “Rickey Bobby” or “Old School”). “Step Brothers” being an exception. When Ferrell is forced to carry a movie on his own or has a co-star that doesn’t ad much to the mix, he comes across more as annoying than funny. That is one of the biggest problems plaguing “The Story of Fire Saga”.

Lars Erickssong (Ferrell) and his best friend Sigrit Ericksdottir (McAdams) are the singing duo, Fire Saga. Although Sigrit has natural talent as a singer, Lars’ passion for singing doesn’t quite match his abilities. Even though her mother feels she should sing solo, Sigrit refuses to part with Lars because she is secretly in love with him. By a stroke of luck or because all the other Iceland contestants died in a party boat explosion, Fire Saga have been selected to represent their country at the Eurovision: Music Contest.

As for the musical performances throughout the film, very few of them stand-out. However, Dan Stevens (who is great in almost anything he is in) does seem to be having a blast as Alexander Lemtov, a fellow contestant who has an eye on Sigrit, even though there are some conflicting signals he is putting out there. Stevens’ easily delivers the best performance in the film and if this was a more realistic story, he would clearly be the one that comes out on top, but we all know who the actual winners will be even before the film starts.

Director David Dobkin is the guy who gave us the comedy classic “Wedding Crashers” but at the same time he was also responsible for the disastrous “Fred Clause”. I would put “Eurovision Song Contest: The Story of Fire Saga” somewhere in between both of those films. Andrew Steele who is not new to writing comedy is new to writing feature films. Andrew worked on the screenplay with Ferrell but it lacks freshness and surprises. Although the cast is mostly fine, I feel if Ferrell wants to continue making films, he should reign it in a bit and bring in some of his old friends to play with. If you are a big fan of the star and the rest of the cast, “Eurovision Song Contest: The Story of Fire Saga” will be premiering on Netflix, June 26th.