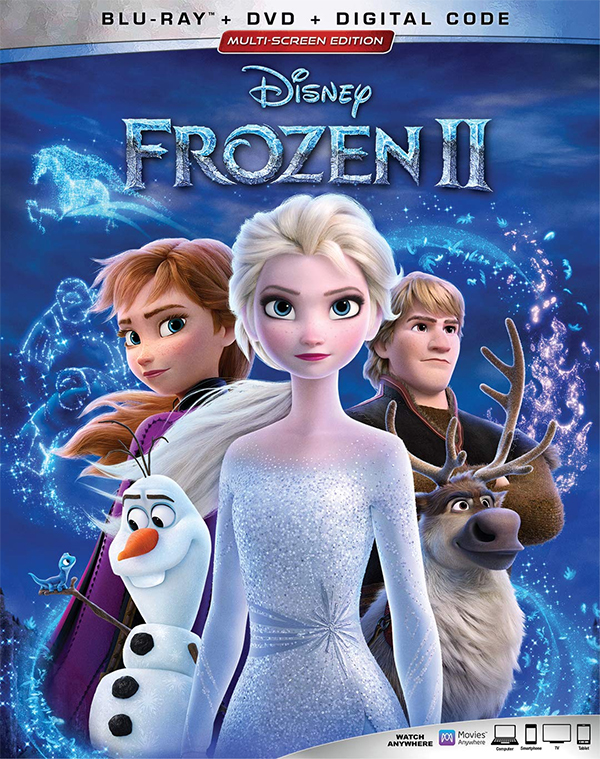 Available this week on Blu-ray, 4K Ultra HD and DVD is Disney’s “Frozen II”, directed by Chris Buck and Jennifer Lee. After a string of unremarkable live-action remakes to Disney classics, the studio finally delivered a crowd pleaser with the first sequel to “Frozen” (which will probably have numerous follow-ups). Although I do think the first film I more memorable in the song department, I did appreciate the darker tone of “Frozen II”. After all, the children who saw the first one in theaters are now six years older and can handle a storyline that is a bit more mature.

Anna (Kristen Bell), Elsa (Idina Menzel), Kristoff (Jonathan Groff) and Olaf (Josh Gad) are all back and this time they are on a quest to find the origin of Elsa’s powers in order to stop the devastation caused by the elemental spirits that Elsa unknowingly awakened. Along the way, the characters learn quite a bit about their kingdom’s history and not all of it is good.  The laughs aren’t as frequent in “Frozen II”, but where is lacks in humor, it makes up for in adventure. There is much more going on in the sequel, which also gives us more characters to follow. Although, not perfect, this is a worthy continuation of the story.

Like all of Disney’s modern animated films, “Frozen II” looks absolutely, beautiful on Blu-ray. I am sure, the 4K Ultra HD release looks spectacular. There are also a ton of bonus features which you can check out below. If you are a “Frozen” fan, you will want to ad this release to your collection.