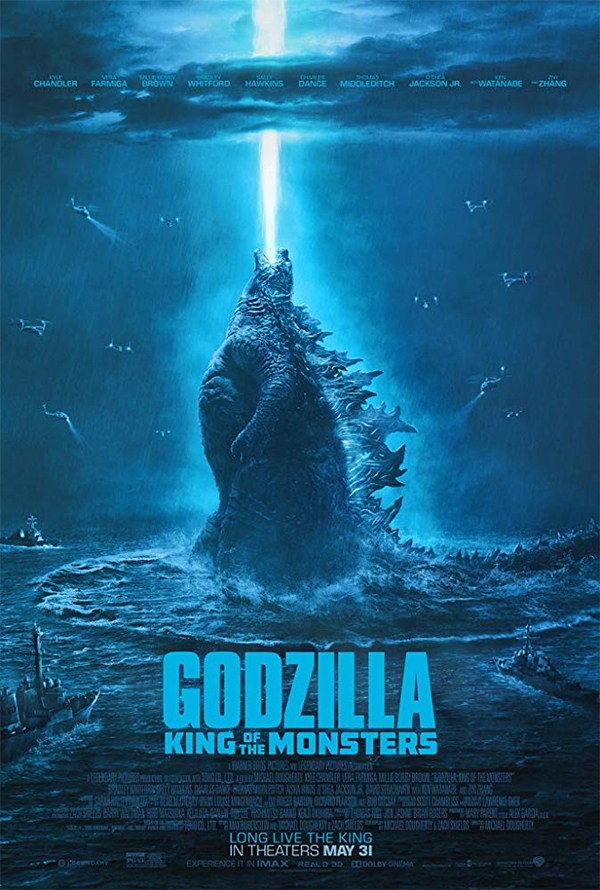 Garth Edward’s 2014 “Godzilla” was simply OK. Sure, it had impressive visuals and some great sequences (the moment on the bridge was my favorite), but the human characters were just not that interesting. In 2017 we were treated to Jordan Vogt=Roberts’ “Kong: Skull Island” which delivered everything you would want in a giant monster film, but also included fun characters and many humorous moments. I would go so far as to say it is my favorite giant monster film of the last decade or two. Now comes the follow-up, “Godzilla: King of Monsters”, directed by Michael Dougherty (“Trick ‘r Treat”).  I can’t call this a great film, but I will say it is a huge improvement over the 2014 one. The characters are “slightly” more compelling, but more importantly, the monsters are just impressive. I wish I had the chance to screen it in IMAX for the full effect.

Set five years after the events of the first film, young Madison Russell (Millie Bobby Brown) is living on a secret facility with her mother Dr. Emma Russell (Vera Farmiga), who has just completed work on a device that can make the gigantic creatures (titans) obey humans as alphas. Things go totally wrong when eco-terrorist Jonah Alan, steals the device and takes Emma and Madison along with it.  His plan is to set all the captured titans free and let them reclaim the planet.

When Madison’s father Mark (Kyle Chandler) finds out his daughter has been taken, he joins the fight to save her, though he also wants to see Godzilla and the rest of the titans killed because his son was a casualty from the fallout during the battle at the end of the first film. “King of Monsters” has a handful of characters with their own agendas but they are mostly just a side-show to the main event. That is of course the battle of the beats. This is where the film doesn’t disappoint.  Fans of these icons will surely enjoy watching Mothra, Rodan, the three-headed terror, known as Ghidorah and of course Godzilla duke it out. Some of the battles are better than others, but they never feel repetitive which is a problem I usually have with modern giant monster movies.

I am going to be honest. I am most excited about the forthcoming showdown between Godzilla and King Kong, then I was about “King of Monsters”. I just hope that film leans more towards “Skull Island” as far as storytelling and characters.  If you loved the 2014 film, then I have no doubt you will go bonkers for this one, but if giant monster movies aren’t your thing, I can’t imagine you being blown away here.