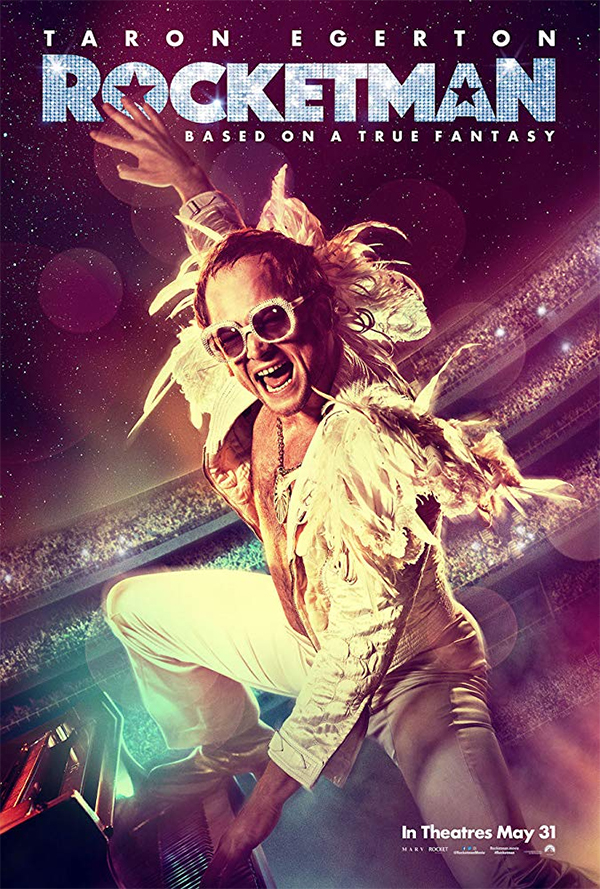 With the massive success of last year’s “Bohemian Rhapsody”, there is not a single ounce of doubt that the musical fantasy about Elton John will be another theatrical hit. All you really need is a capable director, writer, a slew of hit songs and the right person cast as the popular singer and you can pretty-much print money. Thankfully, “Rocketman” has all the right ingredients to make for a delicious cinematic experience.

There are a few things that set “Rocketman” apart from most music biopics. First off, the artist the film is about is still very much alive and played a huge part in the project coming together. Another difference is that this is more of a musical about Elton’s life than a narrative. “Rocketman” has more in common with a film like “Across the Universe” than “Bohemian Rhapsody”.

Director Dexter Fletcher teams up once again with his “Eddie the Eagle” star, Taron Egerton and the pair deliver something exceptional.  The story opens with Elton (Egerton) walking into a group meeting for addicts, while in full-stage costume and begins to share the story of his life. We start with a young Reginald Dwight (Elton’s real name), a shy boy who lives with his unloving mother (Bryce Dallas Howard), unaffectionate father (Steven Mackintosh) and his sweet and attentive grandmother (Gemma Jones). Aside from his Grams, Reginald lived in a home without love.  The only thing he had was his love of music and ability to play the piano.

Reginald’s life takes a shift when he changes his name to Elton and befriends songwriter Bernie Taupin (Jamie Bell). The pair will go on to create numerous hits, which turn Elton into a superstar. “Rocketman” takes us through all of the singer’s biggest songs and each is used to represent a specific time in his life. Yes, the story is told thru song. It is not afraid to shy away from elements of Elton’s life the way, “Bohemian Rhapsody” did with Freddie Mercury.

Fletcher does a fantastic job and the supporting cast is wonderful, most notably Bell as Elton’s longtime music partner and best friend. However, the whole thing feels like it rests on Egerton’s shoulders and as great as Malek was as Mercury, Egerton’s performance tops it. Not only does the young actor physically embody Elton John, but he also has the voice to match.  Yes, we are early in the year still, but I can’t imagine him not earning a best actor nomination.  I did find it a bit fascinating how similar the lives of Elton and Freddie were.  They were both gay, and married to women, they both had shady lovers that took over their business affairs, they both were heavily into drugs and sex, they both let go of who they were to become stars. One of the biggest differences between the two was that Freddie came from a family that cared about him.

If you are a fan of Elton John’s music, or just good music in general and you was to experience some good ol’ fashioned movie magic, instead of another sequel or remake, then I strongly suggest you blast off with “Rocketman” this weekend.