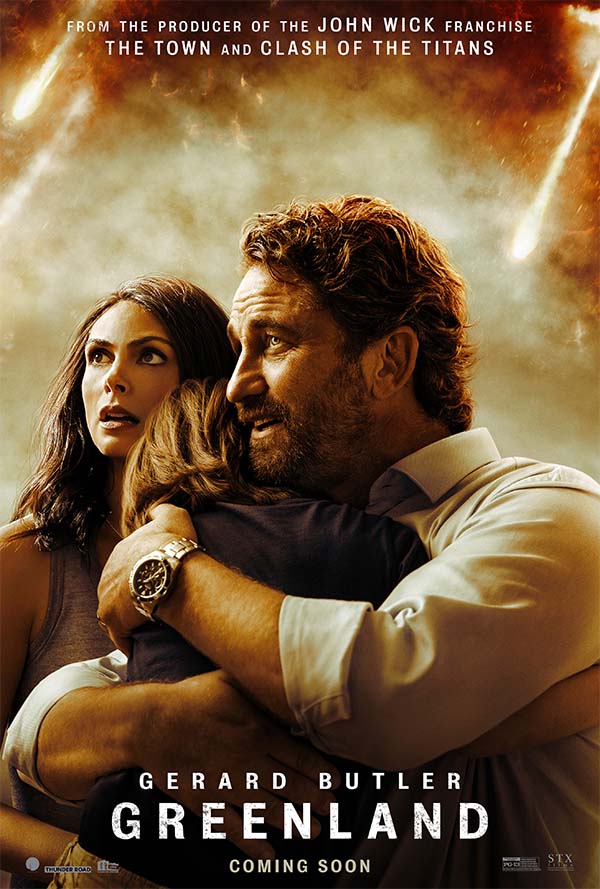 Over the past decade it seems like Gerard Butler has been the go-to actor for studios that want to make an action movie that just barely gets by as a theatrical quality release (even though his latest film is heading to On-Demand due to the ongoing pandemic). While most Hollywood action films today cost north of $100 million, the films that Butler headlines rarely cost more than half that. 2015’s Geostorm being the rare exception. Much like with Liam Neeson, the actor has carved out a respectable niche for himself in Hollywood. Butler reunites with his Angel Has Fallen director Ric Roman Waugh for this latest take on the disaster movie genre, Greenland and I found myself pleasantly surprised by how entertaining it was.

Structural engineer John Garrity (Butler) is leaving work early to spend some time with his son Nathan (Roger Dale Floyd) and his wife Allison (Morena Baccarin). Despite not currently living with his family due to some marital problems, he is still a good father who wants his Nathan to know he will always be there. While getting ready to throw Nate a birthday party at the house, the world is preparing to get a glimpse of a massive comet that will be passing by Earth at a close enough distance to see in the sky. However, when John gets a presidential message on his phone saying that him and his family have been selected to be flown to a safety bunker, he quickly realizes that the comet is going to bring some serious trouble to the planet.

The Garrity family does make it to the military base in time, but when Nathan accidently leaves his diabetic medication in the car, John winds up getting separated from his family in the chaos.  To make matters worse, the military rejects Nathan’s entry onto the plane due to his medical condition. Now Allison must find a way to Knoxville with Nate to see her father and hope that John will receive the message she left for him to find them.

Unlike most disaster movies that work with a massive budget in-order-to impress with digital devastation rather than interesting characters, Greenland spends more time on the people within the family. We want to see the Garrity family make it out on the other end of this terrifying experience. The visual effects are passable at best, but many of the explosions look incredibly fake. Same goes for some of the plane sequences in the film’s final act.

Waugh who helmed the best installment of Butler’s Angel films as well as the very underrated Dwayne Johnson action flick, Snitch does a-very-good job keeping the film moving and exciting, even though the screenplay by Chris Sparling lack anything that feels fresh or new. If you like disaster films, I am sure you will enjoy Greenland.