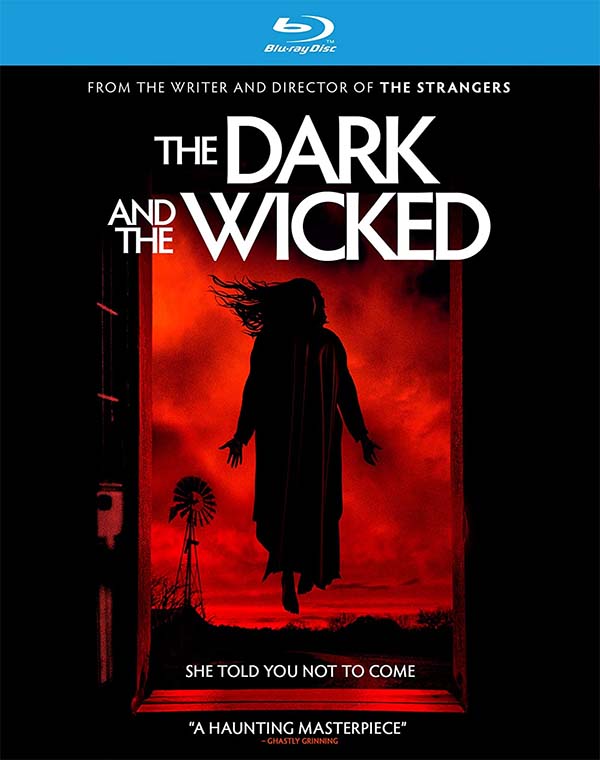 Arriving this week on Blu-ray and DVD is the rural-set supernatural horror film, The Dark and the Wicked, from writer/director Bryan Bertino (The Strangers). 2020 has been a year of an abundance of horror streaming for me. With the ongoing pandemic, I have taken in what could possibly be considered an unhealthy amount of cinematic fear fuel. Weather it be for reviewing, for festival programming or just for entertainment purposes, I believe I have watched more new horror films this year, than any year prior. Having said that, only a select few films that have stayed with me for days after viewing them and The Dark and the Wicked is one of them.

Louise (Marin Ireland) and her brother Michael (Michael Abbott Jr.) return to the isolated farm they grew up in where their father (Michael Zagst) is on his death bed. Louise notices that their mother (Julie Oliver-Touchstone) is behaving strangely, but it isn’t until mom slices off her own fingers in the kitchen and then hangs herself in the barn that Louise gets a sense something darker is surrounding the home. Even after the siblings are paid a visit by a somewhat sinister seeming priest (Xander Berkeley), Michael feels that Louise is overreacting. However, when they both start to see visions of the dead and the many sheep around the farm are mysteriously slaughtered, it may already be too late.

Bertino creates an eerie and haunting setting with the help of cinematographer Tristan Nyby and a fitting score by Tom Schraeder that ads to the already unsettling visuals. Although The Dark and the Wicked isn’t about jump scares, there are some truly memorable moments. One scene in which Michael looks out of a window to see his dead mother smiling and levitating over the grass is quite effective. Sometimes we don’t know what’s a dream and what’s real as well. Ireland is also superb here and it is her unraveling performance that sells it. Even at 95 minutes, this is a slow burn of a horror tale. Don’t expect things to move along quickly.  Be patient and you might be rewarded.