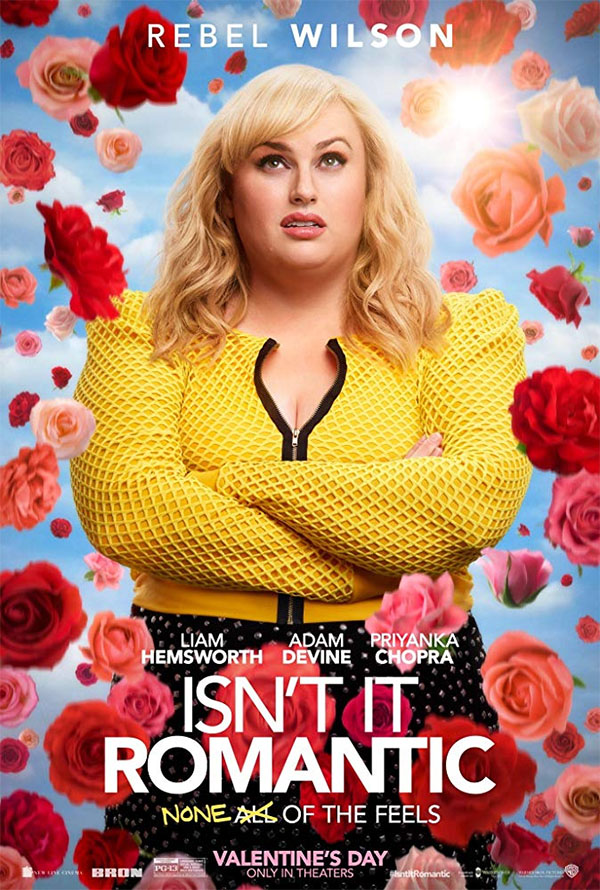 Let me start off by saying that I am a huge fan of director Todd Strauss-Schulson’s 2015 horror-comedy, “The Final Girls”.  The filmmaker was able to successfully spoof the “Friday the 13th” films while also delivering a fun slasher movie in the process.  When I learned that he would be poking fun at the romantic-comedy genre, I was confident it wouldn’t turn out to be anything like 2006’s awful “Date Movie”.

“Isn’t it Romantic” stars Rebel Wilson as Natalie, a New York architect who feels like she is invisible to others in her daily life. She feels unnoticed at work, by her neighbors and basically anywhere.  The one person that has no problem noticing her is Josh (Adam Devine), a co-worker that has done everything he could possibly do to show Natalie that he is interested.  Unfortunately, she is just unable to see it.

When Natalie gets knocked unconscious after a subway mugging, she wakes up to find out that everything in the world is not quite right (we, the audience know that Natalie is dreaming). Some of the differences Natalie notices are that her tiny apartment has been enlarged and filled with nice, expensive stuff.  Her place of work has also been given a high-end gloss and her sweet assistant (Betty Gilpin) is now her vicious enemy.  Her stoner neighbor is now her offensively stereotypical gay best friend who has no other purpose in life than to give her advice and help her with a makeover. Oh, and her billionaire client (Liam Hemsworth) is now in love with her. Yep, Natalie has been thrust into her own romantic-comedy.

One of the romantic-comedy rules is that the main character must go through all this stuff before she realizes that the man for her is her best friend.  Of course, it won’t be that easy since Josh is now dating a swimsuit model (Priyanka Chopra).  We all know how this is going to play out and we know that Natalie will wind up with Josh in the final act.  The problem is “Isn’t it Romantic” isn’t as clever as it want’s to be.  There are a few humorous moments, but none of them delivered anything more than a light chuckle.

“Isn’t it Romantic” isn’t “Date Movie” bad, thanks in-no-small-part to the chemistry between Rebel Wilson and Adam Devine (who were also fun together in the “Pitch Perfect” films). However, the whole things lack’s edge. If the studio decided to go for an “R” rating and allowed the filmmaker and writers to push the envelope, I believe real fun could have been had. There are so many elements to romantic comedies that could be skewered I just wish “Isn’t it Romanic” wasn’t afraid to bite hard.