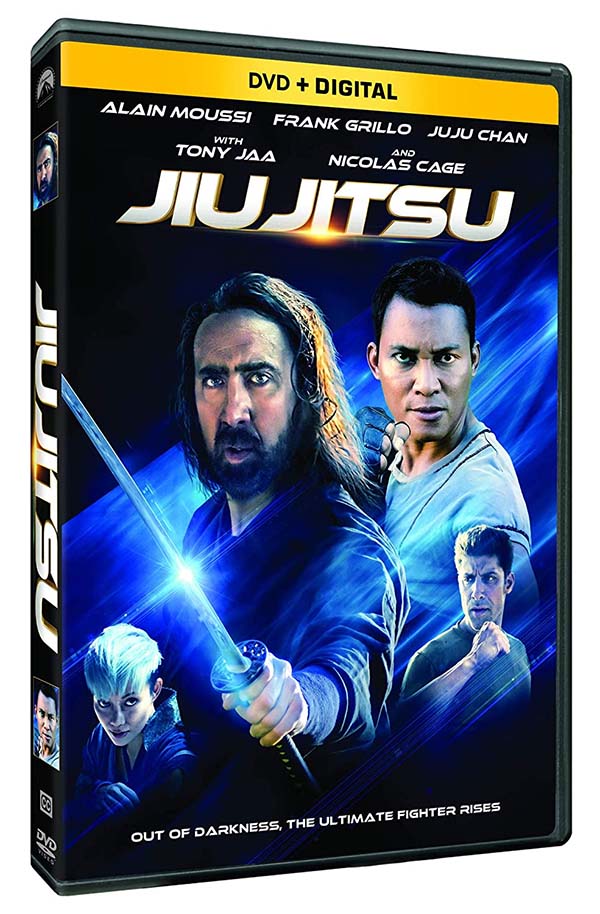 International action star Alain Moussi reunites with Kickboxer: Retaliation director Dimitri Logothetis for one of the most bizarre sci-fi/martial arts hybrids I have ever seen. If an order of jiu-jitsu fighters training to fight an alien being that travels to Earth every six years isn’t weird enough, Jiu Jitsu features a cast that includes Tony Jaa, Frank Grillo, Eddie Steeples and Nicolas Cage. Sure, Cage has made some questionable decisions when it comes to the role’s he has taken in the past decade, but it’s hard to tell if the actor is out of place or fits right in here.

Jiu Jitsu opens with Jake (Moussi) running through the jungle, being chased by an invisible being, before jumping off a cliff into a river.  Jake is picked up by a local fisherman and brought to a military base, where he is questioned by an officer (Marie Avgeropoulos) about what he was doing out there. Unfortunately for her, Jake has absolutely no memory due to his head injury. It doesn’t take long before a couple of jiu jitsu fighters, Kueng (Jaa) and Harrigan (Grillo) invade the base to break Jake out. This leads to a pretty, cool first-person perspective action sequence.

The fighters, along with the military find themselves in the jungle, facing off a predator that can make itself invisible. Yep, this is a Predator knock-off with martial arts. The biggest glaring problem with Jiu Jitsu is that with its premise and impressively unique cast, the filmmakers could have leaned more towards comedy, but sadly, everything is taken way too seriously. Only Cage seems to be in on the lunacy.

While watching this film, I kept thinking back to Cannon Films 1984 WTF feature, Ninja III: The Domination that seemed to fully embrace the multi-genre nonsense. With the-exception-of Cage, there isn’t a fresh moment to be found in Jiu Jitsu, although there are some entertaining fight sequences, thanks to the more-than capable cast. As intriguing as the story may seem to fans of martial arts and sci-fi flicks like myself, I have to say, this one was a real let down.