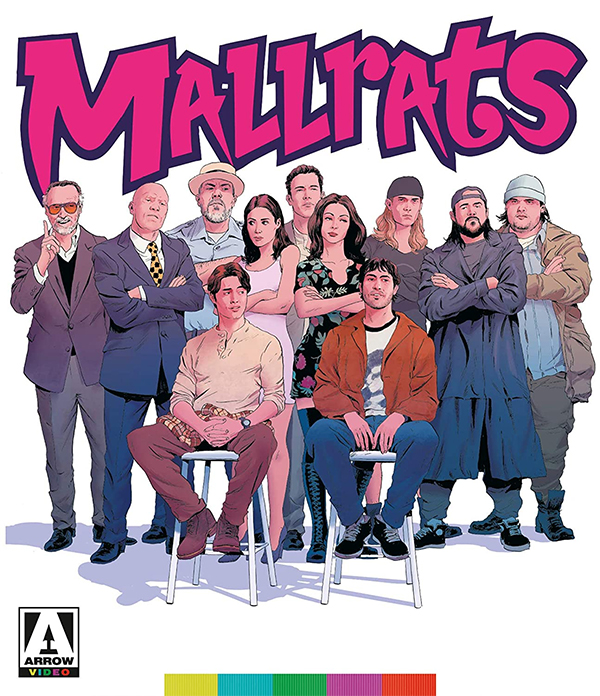 A year after Kevin Smith grabbed the attention of Hollywood with his 1994 breakout indie film Clerks, he was given an actual budget to make a film for Universal Pictures. This time, instead of a couple of immature guys hanging out at a convenience store and video store, Smith brought us a larger group of immature young adults that hang out in a shopping mall. This film is 1995’s Mallrats. Being a big fan of the filmmakers first feature, I was quick to see his sophomore effort opening weekend. I even remember going to see it while I was on vacation in Seattle. Although Mallrats doesn’t get the same kind of love as Clerks (or even Clerks II), I still have a deep fondness for the picture.

For those who are unfamiliar with Mallrats, the story centers on TS (Jeremy London) and his best friend Brodie (Jason Lee). Both men have been dumped by their fed-up girlfriends Brandi (Claire Forlani) and Rene (Shannen Doherty). To deal with their frustrations, they do what almost every other teenager in the mid-90’s did.  They went to the mall. It turns out that a dating came rip-off show is being taped that day at the mall and thanks to Brandi’s TV producer father Mr. Svenning (Michael Rooker), his daughter is the star of the show. With the help of Jay and Silent Bob (Jason Mewes and Kevin Smith respectively), TS and Brodie devise a plan to ruin the show and get their girlfriends back. Brodie also has to deal with the jerky manager of Fashionably Male, Shannon (Ben Affleck) who has his own plans for Rene.

As-long-as you do not watch the painfully offensive extended cut of Mallrats, there is so much here to enjoy. Stan Lee’s cameo here is much better than any of the ones in the MCU. I would love to see Smith return to this world or create similar types of stories with a younger cast. It also seems like a sequel to the original film is finally in the works after a few false starts. I am definitely excited about that.

The original 35mm camera negative as well as the interpositive element were scanned in 4K, The restoration was approved by Kevin Smith and DP David Klein. Although the original Blu-ray from Universal looks fine on its own, there is a very noticeable improvement with Arrow’s release and should please fans of the film. I knew when Arrow first announced this release that the filmmaker would really help make this thing sing when it came to bonus materials and the two-disk set comes stacked. For those of us who simply like listening to Smith talk, there is no shortage of that either. When it comes down to it, Arrow Video’s Mallrats is a must buy for any View Askew fan.

DISC ONE – THEATRICAL AND EXTENDED CUTS