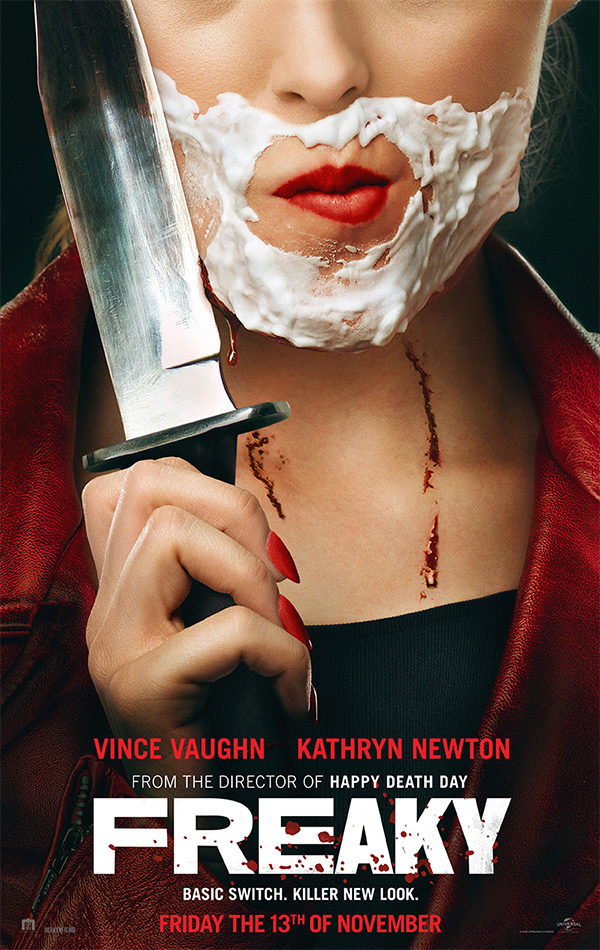 2017’s Happy Death Day was basically a new version of the comedy classic Groundhog Day but with a horror twist.  Keeping with the theme of turning beloved comedies into new horror films, writer/director Christopher Landon gives us a slasher spin on Freaky Friday, simply titled, Freaky. What Landon does well is finding that sweet balance between fear and fun, and he seems to relish in going over-the-top with his kills. Freaky earns its’ “R” rating.

Originally going to be titled Freaky Friday the 13th (there were probably some rights issues there), Freaky mostly takes place on that famous date. Millie (Kathryn Newton) is just your average teenager. She feels mostly unnoticed by classmates and things at home aren’t exactly great. She also has a huge crush on Booker (Uriah Shelton), a fellow student that obviously likes her too, but she isn’t able to notice. Millie also allows people to walk all over her. Thankfully her two best friends Nyla (Celeste O’Connor) and Josh (Misha Osherovich) are almost always around.

Millie is also the school’s mascot beaver and on Thursday the 12th after the homecoming game, the Blissfield Butcher (Vince Vaughn) catches her alone and stabs her with a magical dagger, that seems to physically affect them both. When they wake up the next morning, Millie and the Butcher realized that their consciousnesses have switched bodies. The Butcher was now in Millie’s body and vice-versa. While the deranged killer is now having fun attending high school and picking off teenagers as-well-as teachers, Millie seeks the help of her best friends to help get her body back. It turns out that if Millie doesn’t stab the Butcher with the same dagger before midnight, she will be trapped in his body for good. Given that the entire city is on the hunt for the killer and knows what he looks like, Millie will need all the help she can get to prevent getting caught.

Horror-comedies are my favorite sub-genre when done right and Freaky pulls things off for the most part. Where the film stumbles at times is in the humor. Sometimes it seems like Landon’s cleverness gets in the way of delivering laughs. Still, there are plenty of chuckles to be had.  Mostly thanks to Vaughn who thankfully doesn’t try to go too crazy as a teenage girl. Newton also seems to be having fun, especially when she is playing the Butcher. The scene stealers here however are Osherovich and O’Connor as the other legs of Millie’s tri-pod.

Freaky has a great pre-title opening which does a great job setting up the mayhem to follow, though the rest of the film isn’t as tight as the opening minutes. Still, this is the most fun I have had with a slasher flick in a long time. This genre bender arrives in theaters this Friday the 13th and though I am not going to be the one to urge people to head inside a movie theater right now if they are not comfortable with it, I do recommend heading to your local drive-in and checking it out. If that is not an option for you, Freaky will be available via VOD on December 4th.