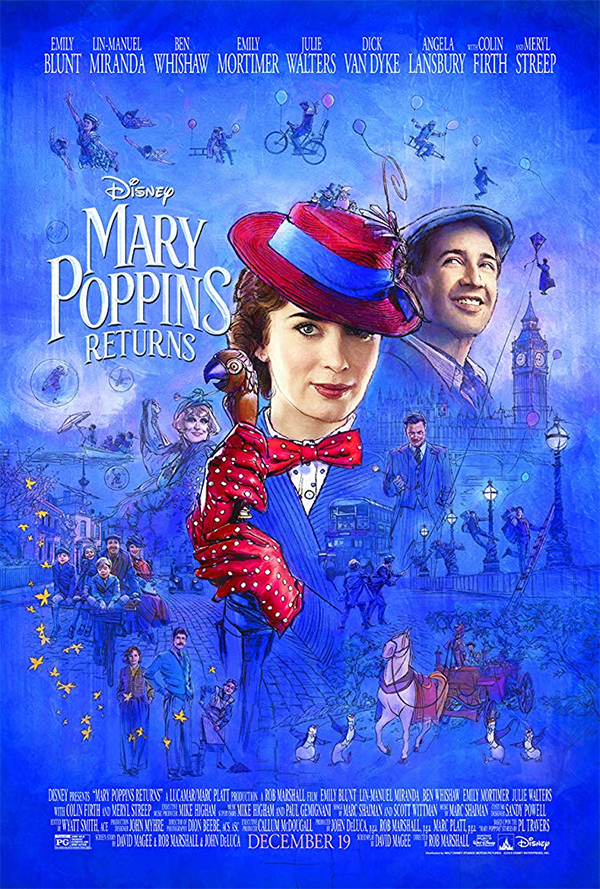 There is no doubt in my mind that the sequel to 1964’s “Mary Poppins” will bring joy to many Disney fans.  Emily Blunt seems to effortlessly step into the role that Julie Andrews brought to life all those years ago. This is a follow-up and not a remake which for the most part was the right way to go.  Although “Mary Poppins Returns” will be a crowd-pleaser, I just didn’t fall in love with it. This is a very likable film with a great cast, beautiful set and costume designs and some fun musical numbers, but the story did not grab me and unlike the original film, the songs are not nearly as memorable.

Set in 1930’s London, the Banks children from the first film, Michael and Jane are now all grown up. Michael (Ben Whishaw) is a widowed father of Anabel (Pixie Davies), Georgie (Joel Dawson) and John (Nathanael Saleh). His sister Jane (Emily Mortimer) helps John look after the children when she is not busy working. Things have been tough on the Banks family, but they have just gotten worse. It turns out that John owes a lot of money to the bank (where he happens to work at). If he doesn’t pay off what is owed, the bank, which is run by William Wilkins (Colin Firth) will take ownership of the Banks’ home.  If John can find the bank shares that his father passed down to him, he could use them to get his house back, but that is a big IF.

Now that things are so dire, it is time for Mary Poppins (Emily Blunt) to once again bring her special magic to the Banks family.  Michael and Jane are more than a little surprised to see Poppins pop back into their life. Even more so since she hasn’t seemed to age a day. Of course, now that they are adults, they have forgotten the tricks that Mary once shared with them.  Now it is time for her to spread the fantastical with Anabel, Georgie and John, as well as local lamplighter Jack (Lin-Manuel Miranda) who knew Mary Poppins when he was a young apprentice of Bert from the first film.

The problem I had with “Mary Poppins Returns” is that despite the great cast, it just doesn’t feel all that special. Unlike the original film, I don’t see people looking back at this one 10-20 years from now and wanting to share it with their children. As far as entertainment, it is perfectly fine for a family outing to the multiplex as it is nice to have something out there that isn’t 100% CGI. Without giving too much away, there is one scene in “Mary Poppins Returns” that just got under my skin.  It involves London’s Big Ben clock.  I don’t want to spoil it but a logical decision by one of the characters could have made that sequence go so much smoother than it actually-did.  It’s hard to tell you why without giving it away, but character’s lack of immediate action upset me. I understood why the scene played out the way it did, but it made me think less of an important character.

There are a few good musical numbers, like “Nowhere to Go but Up”, “Can You Imagine That?”, and “Trip the Light Fantastic”.  Just don’t expect to remember them for years to come like you did with “A Spoon Full of Sugar”, “Supercalifragilisticexpialidocious” and “Chim Chim Cher-ee”. There is also a wonderful animation sequence that was worked on by over 70 animators specializing in hand-drawn 2D animation. Fans of the original will surly get a kick out of it.

“Mary Poppins Returns” is a huge step up from last month’s Disney disaster, “Nutcracker and the Four Realms”. It’s flawed but harmless and there is plenty to admire, but it will never be as beloved as the original. The biggest reason to see this film is Emily Blunt, who is absolutely, magical in the title role.