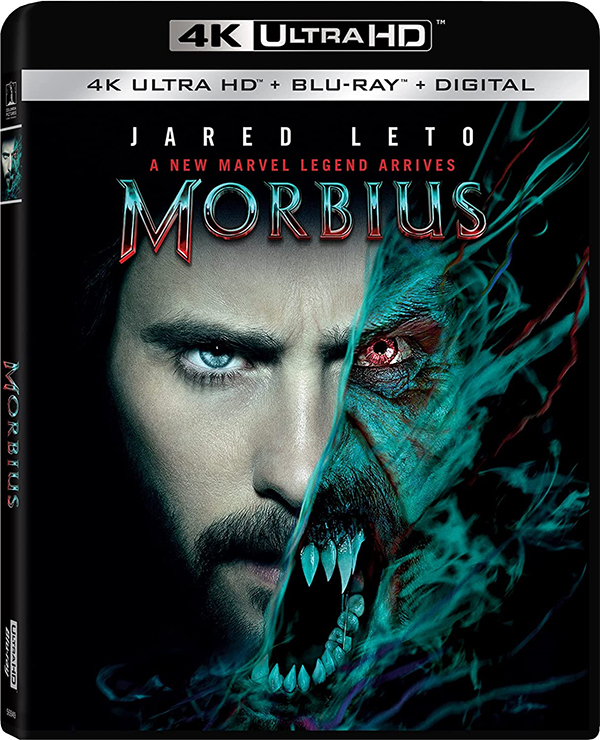 Arriving this week on Blu-ray and 4K UHD is the latest feature film adaptation of a popular Marvel character from the Spider-Man universe, Morbius. Much like Venom and its’ sequel, Doctor Michael Morbius is best known for being one of the web-slinger’s many foes. The film arrived in theaters earlier this year and saying it struggled to find an audience might be an understatement. However, is Morbius as bad as you most likely heard? Let me put it this way. It definitely doesn’t earn any acclaim. However, if this film was released in the late 90’s/early 2000’s, around the time of Blade and Underworld and didn’t need to live up to the high standards Marvel fans have come to expect, I don’t think Morbius would be as despised. The interesting thing is that Morbius actually appears in a deleted scene from the original Blade film, which was to set-up the sequel. However, that never happened.

Biochemist Michael Morbius (Jared Leto) suffers from a rare blood disease that leaves him with crippling pain and most likely a shorter than average lifespan. With the help of his partner and possible love interest Doctor Martine Bancroft (Adria Arjona), Michael experiments on himself in an attempt to find a cure for not only himself, but his friend Milo (Matt Smith). Using the DNA of vampire bats that he captured in Costa Rica,

Michael Morbius does find a temporary cure to his illness. However, there is a cost. He now must feed on human blood and if he fails to do so, nobody around him would be safe. Yep, the doctor has turned himself into a vampire. After tearing apart an entire crew of armed thugs on a boat, Michael does learn to somewhat control his predator side, but when Milo decides to take the vampire cocktail himself, he embraces the monster he has become and now Michael must put a hold on curing himself, so he can take down his oldest friend.

Morbius is a simply okay film. It doesn’t offer anything fresh and it is common knowledge that quite a bit was cut out of the final film while it sat on the shelf for two years before eventually being released. It’s a shame that a director’s cut wasn’t included in this release. The studio may have felt it wasn’t worth the extra effort.  In the end, Morbius delivers some entertaining action and good performances from Leto and Arjona. Smith seems to be having a little fun too when he is hamming things up. While I can’t say this is a very good Marvel film, I can say it is far from the worst.