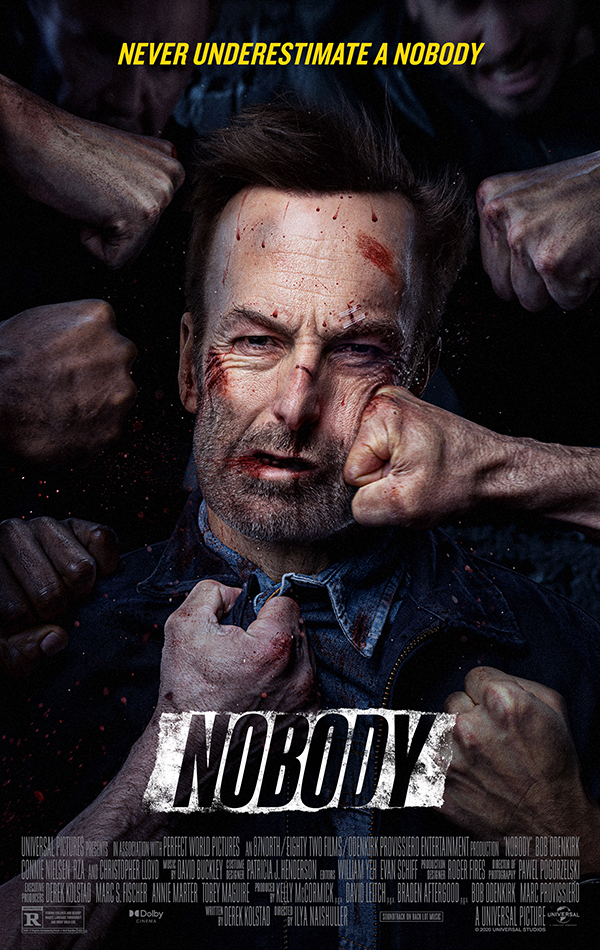 Director Ilya Naishuller’s 2015 feature film debut, Hardcore Henry made me nauseous upon a theatrical viewing. It was a first-person perspective action film that was so relentless and chaotic that all that movement in the first person perspective made me physically ill. Just because it works for a video game or even a short film, doesn’t mean it works for a feature. As much as I hated Hardcore Henry, Naishuller’s follow-up, Nobody is absolutely enjoyable.  This time, he has paired up with John Wick screenwriter Derek Kolstad and they have delivered one of the best action-thrillers of the past couple years.

Hutch Mansell (Bob Odenkirk) lives a simple, mundane life in the suburbs with his wife Becca (Connie Nielsen) and their kids Blake (Gage Munroe) and Abby (Paisley Cadorath). He wakes up each day, takes out the garbage (but missing the garbage pick-up), goes to work, comes home, has dinner, goes to bed, rinse, repeat. Nothing exciting ever seems to happen.

One night when a couple of burglars break into his home, Hutch decides not to attempt to stop them. This disappoints is son, who now sees his father as a coward.  However, the increasing frustration Hutch feels reaches the breaking point when his daughter tells him that the burglars stole her kitty-cat bracelet. This kicks-off a series of events that catches the attention of local crime-boss Yulian Kuznetsov (Aleksey Serebryakov) and we soon learn that Hutch has a secret past that he has kept bottled up for a long time. Yep, Hutch is a certified badass and those who stand against him are in for some serious trouble. Hutch’s dad David (Christopher Lloyd) as well as adopted-brother Harry (RZA) are also connected to his top-secret work history which reveals that he was the guy the government sent in when they wanted to silence anyone that they could not take into custody.

Nobody runs at a nicely paced 92 minutes, and delivers on plenty of well-staged action sequences, including Hutch’s first major fight on a public bus as well as when he defends his home by taking on an army of masked hitmen. There is plenty of dark humor and although there isn’t much as far as character development, I was entertained throughout. Odenkirk makes for a surprisingly effective action hero and I have a feeling that if Nobody does well, we could potentially see a franchise build from here. As the theatrical release may be limited due to the ongoing pandemic, hopefully it does still generate enough of a profit to keep the story going.