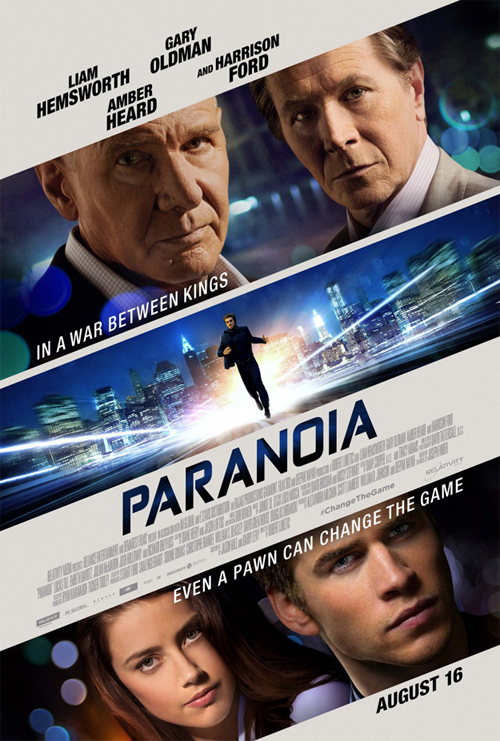 After watching the trailers for “Paranoia”, I was absolutely sure that the movie was going to be a total stinker, despite the fact that Gary Oldman and Harrison Ford were headlining.  It didn’t help matters that this thriller was being helmed by the director behind bad comedies like “Monster-in-Law, “The Ugly Truth”, and “Killers”.  So, imagine my surprise when I found myself being quite entertained by director Robert Luketic’s “Paranoia” This is by no means a great film, it’s barely even a good one, but thanks to the cast, brisk pacing, and extremely low expectations, I can actually recommend “Paranoia” to those who are fans of Oldman and Ford.

Adam Cassidy (Liam Hemsworth) is a tech wiz who gets in over his head when blackmailed into stealing trade secrets from Jock Goddard (Ford) for his former boss Nicholas Wyatt (Oldman).  Wyatt was a former employee of Goddard’s. His old boss build his company on Wyatt’s work and then kicked him to the curb.  Now that Wyatt is a major player, he wants to get even with Goddard, and he needs Adam to help him do it.

“Paranoia” doesn’t bother to break any new ground, but that’s ok.  Even though movies like this were big a decade or two ago, we don’t see that many of them anymore and sometimes even a decent thriller like this is a welcome change.  Hemsworth is ok here. He is charming and has a good presence like his brother Chris.  The real draw however are Ford and Oldman and the few scenes they have together are by far the highlights of “Paranoia”.   It was also nice seeing Richard Dreyfuss on screen as Adam’s ailing father.

There is some stupidity here, especially when it comes to Wyatt’s gun-for-hire, played almost laughably by Julian McMahon.  He is about as threatening as sugar-free Jell-O.  If you are a fan of this genre, then I am sure you will be entertained by “Paranoia”.