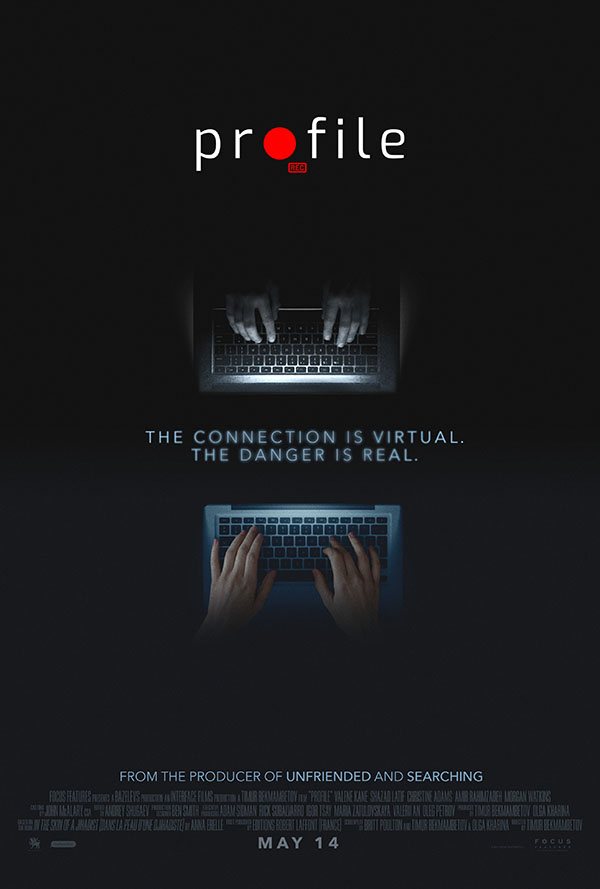 Based on the non-fiction book, In the Skin of a Jihadist, the new internet-thriller, Profile, directed by Timur Bekmambetov (Wanted) follows similar beats to the 2018 surprise hit, Searching. However, since Profile had its’ world premier back in 2018 as well, it isn’t like this week’s new release tried to capitalize on the former’s success.

Amy Whittaker (Valene Kane) wants to get ahead as a journalist and her investigation into European women being recruited by ISIS just might do the trick. Amy creates a phony Facebook profile, going by the name of Melody Nelson. She then starts liking and sharing violent ISIS posts to grab someone’s attention. It doesn’t take long for Bilel (Shazad Latif) to reach out to Amy, where she learns that he is an ISIS fighter, living in Syria.

Amy’s journalistic talents however didn’t prepare he to start having a romantic interest in Bilel and as she gets deeper into the process, her feelings towards the dangerous man become even more complicated. As a result, she not only is jeopardizing her job and relationship with her boyfriend, but also her life. Profile does take a few turns that I found hard to buy into, but it would be nearly impossible to mention those without spoiling or revealing things that are best left to be discovered.

Just like with Searching, it is the performance by the main character that things mostly rest on. If we couldn’t connect with Amy (Valene Kane), then Profile would have fallen flat. Thankfully, Valene, as-well-as Shazad both give strong and engaging performances. I did find myself entertained throughout, even though I am pretty much over these internet-based thrillers already.