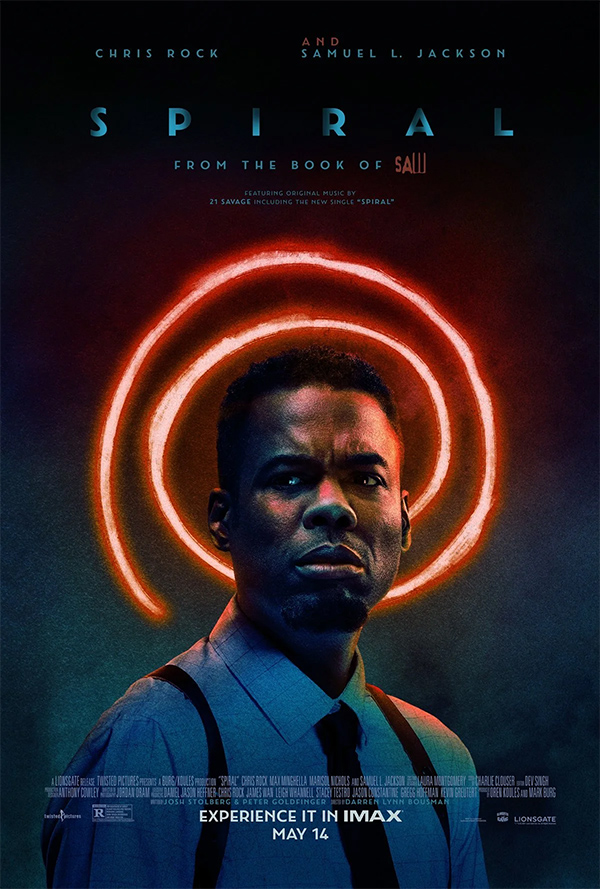 Darren Lynn Bousman, who directed Saw II-IV returns to the long-running franchise with Spiral, the 9th installment of horror series. John Kramer aka Jigsaw is long gone and now someone else has picked up his killer trap ways. This time around the Jigsaw copycat is targeting dirty cops, which doesn’t surprise me, considering the times we are living in. Comedian/actor Chris Rock was the driving force behind Spiral, having wanted to try his hand at horror. Although Rock does at times seem a little out-of-place in such a serious and gruesome flick, he does find a way to settle into the material as the story progresses.

Detective Ezekiel “Zeke” Banks (Rock) is hated by just about every cop in his precinct because he snitched on his former partner who murdered an innocent witness. He has never been able to live up to the reputation of his police veteran father (Samuel L. Jackson) and Banks is consistently angry and bitter, with good reasons. He can’t trust a single person in his department, which is why he isn’t too thrilled when rookie Detective William Schenk (Max Minghella) is assigned to be his new partner.

One thing I want to point out is that Spiral is most definitely a Saw movie, but at the same time, it is just as much a police procedural. We spend less time with victims and traps and more time with Detective Banks and Schenk trying to figure out who the new killer is. As a narrative, Spiral is much slicker and cleaner than the films that came before it. It is obvious that Bousman and Rock wanted to change things up a bit. However, at the end of the day, the audience who enjoy the prior films, want to see more contraptions rip people apart. I am happy to say that the kills are splendid and should please horror fans. The rest of the film doesn’t move along swiftly though. Spiral is much slower than I would have expected. Still, I was never bored, and I am curious to see where the series will go from here.  Although Spiral isn’t as memorable as the first few films in the series, it is definitely a step up from the last few installments and that is a step in the right direction.