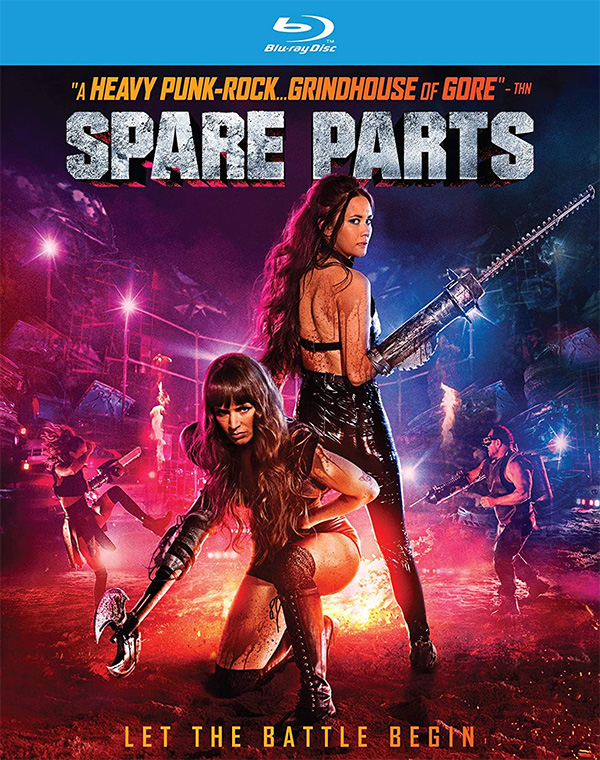 Arriving on Blu-ray this week is director Andrew Thomas Hunt’s punk-rock, junkyard gladiator battle flick, Spare Parts. If that description catches your attention, then this is without-a-doubt, a movie for you.

While on an American tour, Canadian all-girl pink band, Ms. 45 find themselves in a bar-brawl with a few of the not-so-friendly locals. The fighting skills of the band members catches the attention of Sam (Jason Rouse). Shortly after, Sam kidnaps the band and brings them to fight for his father, The Emperor (Julian Richings) in a gladiator battle to the death. Emma (Emily Alatalo), Amy (Michelle Argyris), Cassy (Kiriana Stanton) and Jill (Chelsea Muirhead) have thier limbs amputated and replaced with deadly weapons, like axes, blades, etc. Despite their displeasure of being abducted, mutilated and held prisoner, the women bring pleasure to their captors as well as the audience in the bloody brawls.

Spare Parts is essentially a culmination of elements from other films. I felt some influence from Mad Max: Beyond Thunderdome, Battle Royale and other genre titles. Still, Hunt as-well-as screenwriters David Murdoch and Svet Rouskov deliver the goods on a minimal budget. Sure, I wish the battles were a little more outlandish, but I still managed to be thoroughly entertained and I wouldn’t mind seeing some sort of sequel.