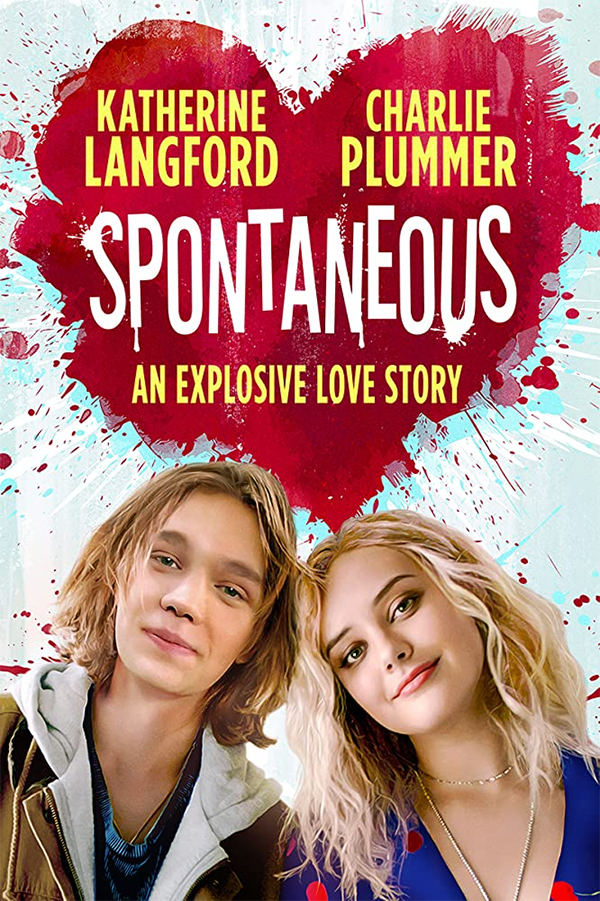 Writer Brian Duffield knew exactly how to blend wickedly dark humor with a sense of humanity, compassion, and bloody fun when he wrote the 2017 Netflix feature, The Babysitter. Now he makes his directorial debut by adapting Aaron Starmer’s novel, Spontaneous and he continues to impress.

Mara (Katherine Langford) and Dylan (Charlie Plummer) are sort-of outcasts at their high school. Mara lacks any kind of filter and doesn’t seem to get phased by most things. While Dylan is a much more quiet, shy and mostly reserved teen.  Yet, the two find each other and a budding romance follows. Although their relationship is sweet and the two stars have terrific on-screen chemistry, the story isn’t what you would consider your average teenage, rom-com. You see, there is a pandemic going on that is causing the kids from Mara’s particular school to spontaneously combust. At any-given-moment a teenage will just explode, leaving a big bloody mess.

Although there is a great deal of humor in Spontaneous and an ever greater deal of blood, it is the dialogue and performances that really drive this film home. The tone is reminiscent of 1988’s Heathers, which is a film I absolutely love. The marketing for Spontaneous has been somewhat misleading. It is being promoted as more of a comedy, but there is much more going on here than one would expect. I mean that in a good way. One of the reasons the film succeeds is because we care about the main characters and we want them to be OK.  Spontaneous also features a strong supporting cast. Hayley Law is very good as Mara’s best friend, Tess and I liked seeing Rob Huebel in a more serious role as Mara’s dad.

There are so many differ directions Duffield could have taken things, but I have a feeling he handled Starmer’s source material just-right, even though I never actually read it.  The filmmaker took a film about kids who explode all over the place and somehow made it smart and relatable. That is no easy feat. With us currently living in a pandemic of our own, Spontaneous feels timely. Let’s just hope we don’t start combusting next.