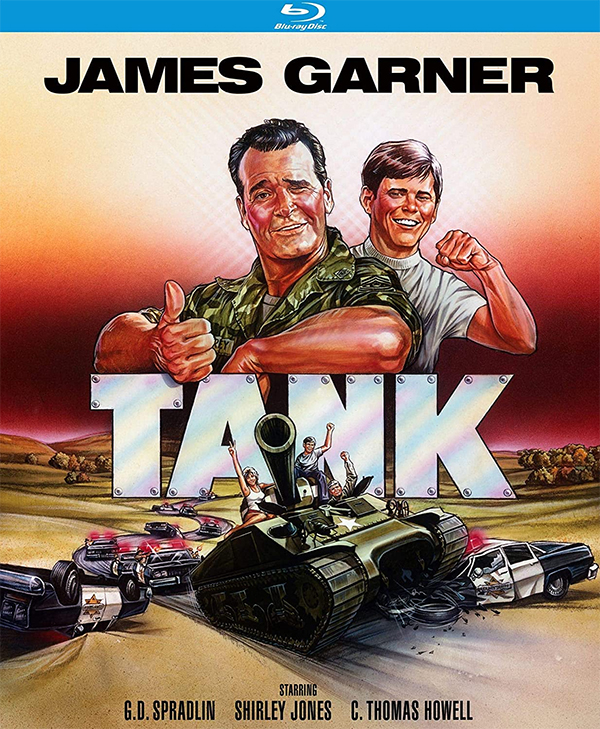 Arriving on Blu-ray for the first time is the 1984 action-drama, Tank, starring James Garner, Shirley Jones, James Cromwell and C. Thomas Howell. Although I was well-aware of the film, I had never actually seen Tank until now. It totally felt like a made-for-TV movie, which makes sense since that was pretty-much what director Marvin J. Chomsky was known for.

Sergeant-Major Zack Carey (Garner) and his wife (Jones), along with their son (Howell) have just relocated to Clemmons County, Georgia where he plans to take his final post before retiring. He brought along his World War II Sherman tank along with him, which he spent years restoring with his son Billy. One night while having a drink at a local bar, he gets in a fight with the deputy (Cromwell), who was slapping around a young prostitute named Sarah (Jenilee Harrison). When Sheriff Beulton (G.D. Spradlin) sees Carey’s handywork all over Deputy Euclid’s face, he wants to make sure the military man pays for it. When Carey makes it impossible for the Sheriff to arrest him, the local crooked law go after Billy by planting drugs in his locker. Now with Billy locked away, it is up to Carey, Sarah and the big tank to break him out and get him across state lines in order to get the teenager a fair trial.

Tank, deals with some tough issues like corrupt law enforcement, prostitution and assault, yet everything feels way too light for the subject matter. Garner is fine here but there isn’t much else to Tank that makes it stand out. Watching the tank demolish the police station is a nice touch but other than that, there isn’t much here worth recommending. The transfer looks good and might be worth an upgrade from DVD or VHS if you are a fan of the 80’s Garner flick.