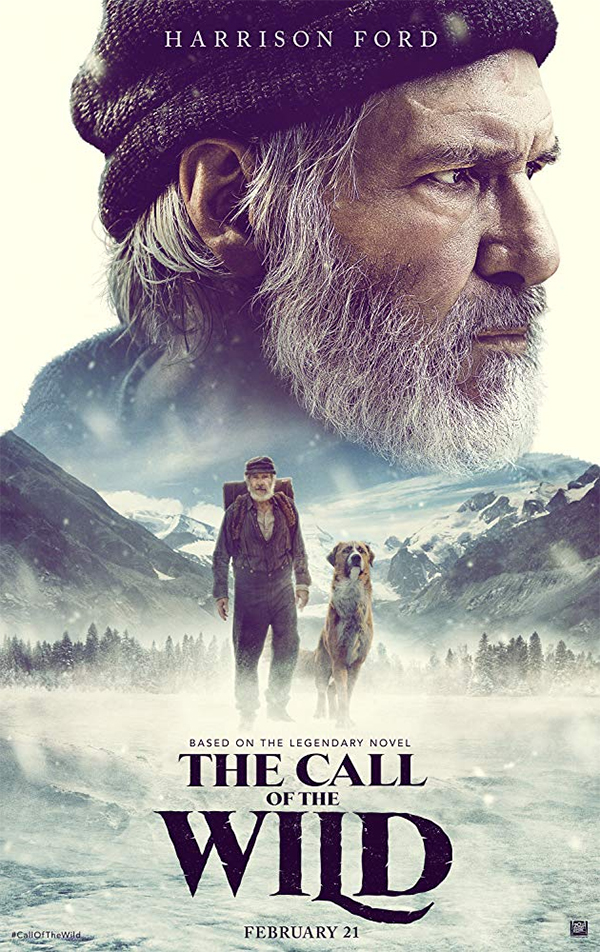 Jack London’s novel, “The Call of the Wild” has been adapted into numerous films and I can’t recall if I have seen a-single-one of them. After finding great success helming animated features like “Lilo & Stitch” and “How to Train Your Dragon”, director Chris Sanders tries his hand at live action with mixed results.

Let me first start off by saying that the marketing has been a little bit misleading. Harrison Ford is billed as the star, but it feels like he is only in about half the film. Not having read the novel, I was a bit surprised. However, those familiar with the story may expect it. I didn’t have a major issue with Ford’s smaller than expected role, mainly because I was mildly entertained by not only Buck the St. Bernard/Scotch Collie mix, but his journey from spoiled house dog to struggling sled dog. Those who love stories about man’s best friend will find quite a bit to enjoy with “The Call of the Wild”.

As the story opens, we meet Buck (brought to life by motion capture performer Terry Notary and CGI). His master is Judge Miller (Bradley Whitford), who absolutely loves his dog and barely gives him a slap on the paw, no matter how much damage the massive hound creates. Buck is living a fun and sheltered life, that is until he is dognapped and shipped off to the wilds of the Yukon where large dogs are needed for those in search of gold.

Buck is first sold to a postal carrier couple (Omar Sy and Cara Gee), who make him a sled dog.  However, the leader of the pack doesn’t like the new addition and it’s only a matter of time before the two dogs battle it out for the spot of alpha. Buck does win, and becomes the lead sled dog, but that honor soon ends when the carrier route is terminated and Buck and the rest of his team are put up for sale again.

Unfortunately, “The Call of the Wild” takes a turn for the worse, when the usually excellent Dan Stevens arrives on screen as the villainous gold seeker, Hal.  I have to say, his over-the-top performance as the baddie is truly awful and feels like it belongs in some bad adventure comedy. Thankfully for Buck, he is soon rescued by John Thornton (Ford), has his own inner demons but knows how to care for an animal.

Although the final quarter plays out mostly how one might expect, it is also what I feel is the strongest part of “The Call of the Wild”. The bonding between John and Buck is great, but even better is when Buck begins to find his true place in the world. The CGI dog might have been a little off-putting in the beginning, mainly because he never looks as real as the apes in the recent “Planet of the Apes” films, but I was able to quickly accept and believe Buck was living in that world.

“The Call of the Wild” isn’t a great film. It isn’t even half as good as “Togo” which is streaming on Disney +. Yet, if you are looking for a nice movie to see with the family in theaters, this wouldn’t be a bad choice.