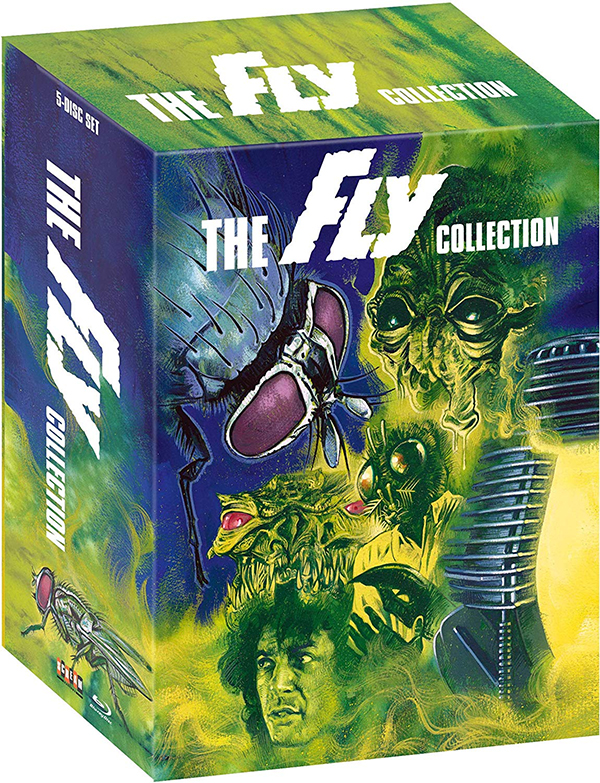 Earlier this year, Shout! Factory/ Scream Factory made my wish come true when they released the “Critters” films on Blu-ray for the very first time. All four titles in one lovely box set. Now they are ending 2019 in a big way with The Fly Collection. This five-disk set includes 1958’s “The Fly” and its’ two sequels, 1959’s “Return of the Fly” and 1965’s “Curse of the Fly”. It’s hard to believe that horror franchises have been around for more than 60 years. The two film’s I grew up with were the remakes. David Cronenberg’s “The Fly” from 1986 and 1989’s “The Fly II”, directed by F/X artist Chris Walas. Both titles are included in The Fly Collection.

I hadn’t revisited the original Vincent Price starring film since I was a child and although many of the classic horror films of the time are hard for me to get into, there is still so much to appreciate about “The Fly”.  The first sequel, “Return of the Fly” is actually more enjoyable, though I can’t say that I was a fan of “The Curse of the Fly”. I had never seen the third film in the series until now and it goes the “Halloween” route by ignoring the events of the second film. The transfers for all three of the originals look quite good though.

When it comes to “The Fly” and “The Fly II” from the 1980’s, those are the real gems of the collection. Not only do the presentations look beautiful, those films are packed with an impressive number of bonus features. “The Fly” (1986) includes a new interview with Mel Brooks (who was an executive producer), composer Howard Shore, Cinematographer Mark Irwin and casting director Deidre Bowen. “The Fly II” included new interviews with producer Stuart Cornfeid, screenwriters Mick Garris and Ken Wheat, Composer Christopher Young, F/X artist Tom Sullivan and cinematographer Robin Vidgeon.

Although this set was released last week, it took me a little extra time to go through it and I must say, if you are looking for a last minute gift for your favorite horror fan before the Holidays next week, “The Fly Collection” would make a wonderful gift.  If you are a fan of the franchise yourself, this is a set that is definitely worth owning.