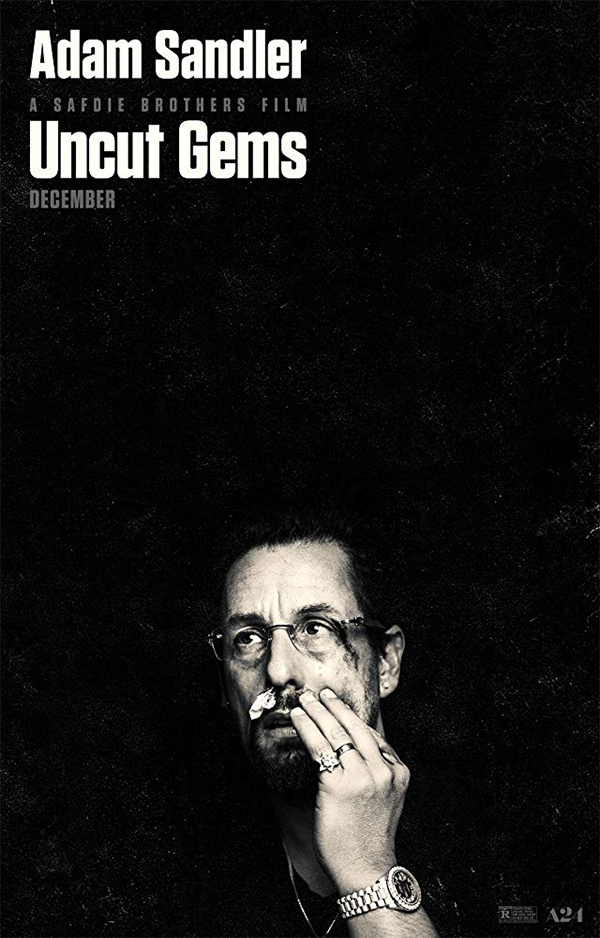 Let me start of by saying that I have never seen any of the Safdie Brothers previous films. I have heard great things about 2017’s “Good Time”, but I never got around to actually watching it. From what others have told me, if you enjoyed “Good Time”, you will most likely feel similar about their latest film, “Uncut Gems”. Despite some fantastic camera work, frantic New York City set energy and a strong yet annoying performance from Adam Sandler, I can’t say I found much to enjoy about the crime-drama.

“Uncut Gems” opens at an Ethiopian Jewish mine where a worker gets seriously injured while retrieving a valuable opal diamond. We are then immediately taken to New York City, where jewelry store owner Howard Ratner (Sandler) receives the uncut opal with plans to auction it off. The money from the auction would help Howard pay off his massive gambling debts, which he owes to his shark/ brother-in-law, Arno (Eric Bogosian).

Howard has a sickness. Aside from his gambling addiction, and his inability to be faithful to his wife Dinah (Idina Menzel), he keeps letting his life spin completely out of control. The strongest relationship he has is with his mistress/ employee, Julia (Julia Fox) and even that has its own issues. Howard makes one bad decision after another. One of them includes letting NBA star Kevin Garnett (playing himself), hold on to the opal for good luck. For collateral, Kevin let’s Howard hold onto his NBA ring.  Unfortunately, he then turns around and pawns it for some quick cash. From that moment, things quickly dive into a seemingly endless dark nightmare for Howard.

Sandler has always excelled at obnoxious, yet this time around, he is not playing it for laughs and his performance works. If you are someone who doesn’t like the comedic actor, I don’t see your opinion changing much after “Uncut Gems”, but Adam does play it perfectly. My problem here is that despite the film’s gritty feel, which I love, I found myself bored through a good chunk of the 135-minute runtime. There are some serious pacing issues, even with the frantic energy. Maybe if 20-30 minutes were cut from the final film, it could possibly have worked better for me, or it could have turned out worse. I will say that Benny and Josh Safdie are talented filmmakers, and I am interested in going back and looking at some of their earlier projects. I also think, Sandler is quite good, though I am not sure if his performance warrants award consideration.