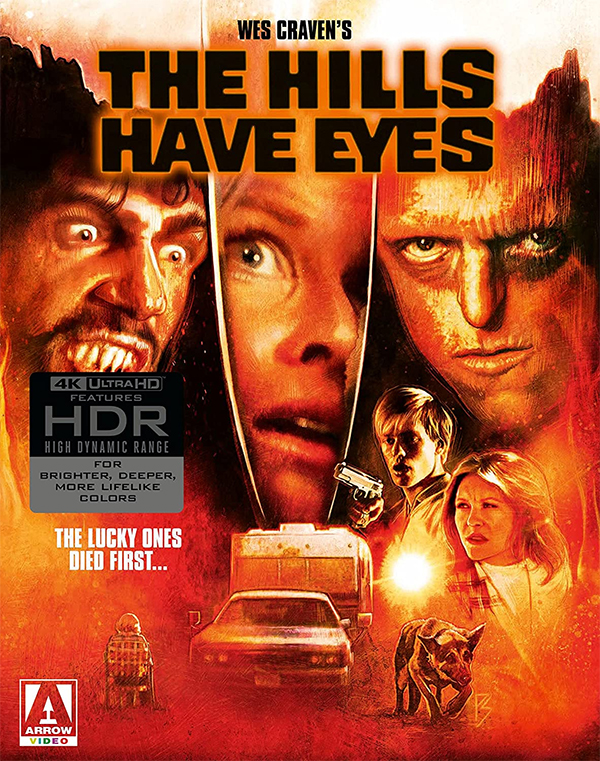 In 2016, Arrow Video released an impressive Limited Edition Blu-ray for The Hills Have Eyes, which was loaded with bonus content and featured a 1080p presentation of a 4K restoration. Earlier this month, Arrow released a Limited Edition 4K UHD of the 1977’s horror classic, which was the third feature film from the late Wes Craven.  Although I am one of the very few who prefer Alexandre Aja’s 2006 remake over Wes Craven’s original, I will agree with most that both versions of The Hills Have Eyes 2 suck big time.  Just because this is one of the very few times I prefer a remake, that doesn’t mean I am not a fan of Craven’s original film.  The original is twisted, gritty and was definitely a product of its’ time.

While I was very happy with the Arrow’s release from five years ago, there are a handful of noticeable improvements that come with this 2160p resolution transfer. The film was originally shot on 16mm and this new transfer was taken from a couple of different 35mm sources in order to deliver the best presentation possible. While there is definitely plenty of grain, it actually helps give the film the raw look that was intended. Keep in mind that this was originally a 16mm feature. Arrow’s HDR10 presentation helps almost everything on film pop, especially in the scenes that take place in the daylight.

While the packaging and bonus content is basically identical to the 2016 Blu-ray, one of the biggest improvements here is the audio, The previous Blu-ray only had an English mono track which was fine. However, now we are given a 2.0 stereo and 7.1 remixes which makes for a much fuller viewing experience. However, they are not available for the alternate ending.

The big question here is if it is worth upgrading to the new 4K UHD if you already purchased the 2016 Limited Edition Blu-Ray. I think that really depends on how big of a fan you are of The Hills Have Eyes.  Aside from the mentioned improvements, both releases feature the same extras. If you never picked up Arrow’s previous release and have a 4K setup, then this is definitely worth adding to your collection.