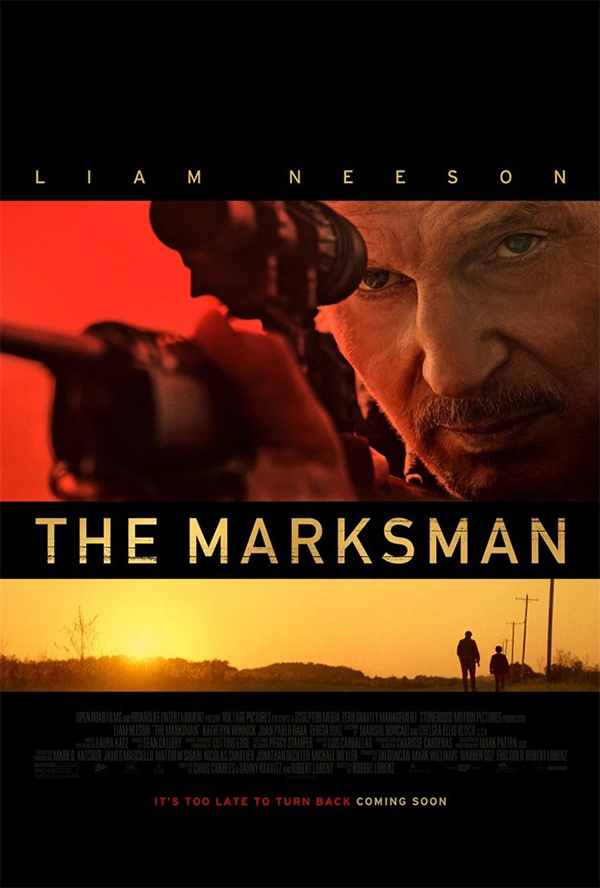 If I am not mistaken, I believe Liam Neeson will be making history this week, being the first actor to headline two theatrical film releases during the ongoing pandemic. Earlier this year, he brought us Honest Thief (which I skipped entirely) and now he is back with The Marksman. Director Robert Lorenz follows up his 2012 Clint Eastwood led sports-drama Trouble with the Curve, which was his directorial debut with the latest in a long repetitive line of Liam Neeson with a gun films. Even though these run-of-the-mill action-thrillers that the veteran actor has been churning out over the past decade have been getting less and less interesting with each one, studios still seem to be willing to let the otherwise talented actor cash a paycheck and that’s fine, but what is really sad is that Neeson is just so much better than the projects he is taking.

Jim Hanson (Neeson) is a patriot. He fought in the war and he does what he feels is right for the country. Even when he is working on his ranch which sits on the Arizona border, he reports any Illegal Aliens he sees to the Border Patrol.  Despite trying to be a stand-up citizen, his ranch is failing and he is on the verge of losing his home to the bank. He also questions the country’s leadership (which is something most of us are familiar with). The big difference between this film and most of Neeson’s other action films is that this one is very political. At the same time, it is unfortunately very stereotypical when it comes to the portrayal of its’ Mexican characters.

Jim’s life gets even more complicated when he sees a mother (Teresa Ruiz) and her son Miguel (Jacob Perez) cross the border fence and nearly his them with his truck. His first instinct is to report them to the B.P. but when the Cartel show up at the other side of the fence, demanding he turn over the mother and son, Jim decides to pull out his rifle instead, killing the brother of the head henchman Maurico (Juan Pablo Raba). Obviously, the guy is pissed-off.

Jim does save Miguel, unfortunately his mom doesn’t make it. With her dying breath, she makes Jim promise to take her son to Chicago to be with his cousins. Jim does take Miguel but with hesitation, knowing that the kid won’t survive if he doesn’t. There is also the matter of the bag-of-cartel-cash that the mother left in his truck.

The Marksman is essentially a road trip film and the budding relationship between Jim and Miguel with very few moments of actual action. This is a perfect example of how thrill-less an action-thriller can be. There are three writers credited and this is the first screenplay for each of them. The lack of writing experience shows as it feels like pieces were taken from various other better films. There is also the matter of one of the film’s most useless characters, Sarah (Katheryn Winnick). She is Jim’s stepdaughter. Despite working for the Border Patrol, she is given almost nothing to do. It felt like her only reason for being there was to allow Jim access into a secured building to grab Miguel before he is deported back to Mexico.

I never expected The Marksman to be good, but hoped that it would at the very least offer some mindless entertainment. Even those who love every Neeson action film there is will probably feel like enough-is-enough with this one.