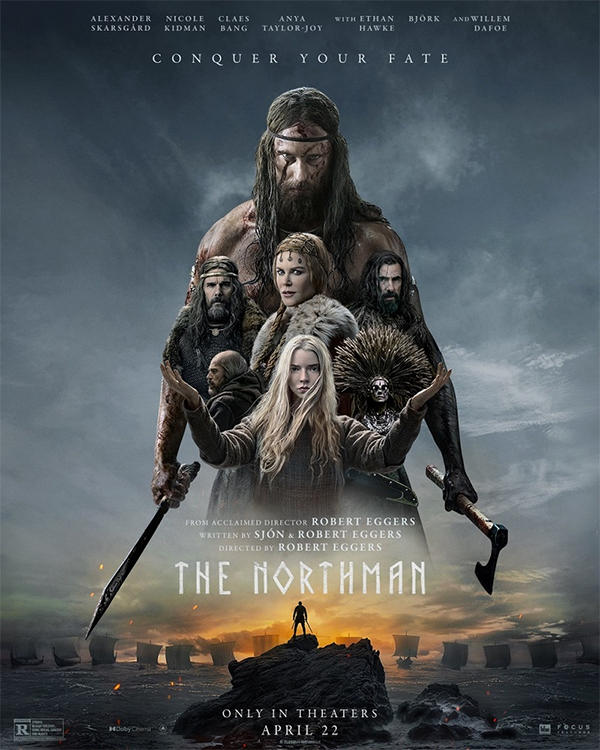 Before I begin this review, I feel I must state that I haven’t been much of a fan of Robert Eggers work as a writer/director. I just haven’t been able to connect to his style of storytelling. While there were aspects to both The Witch and The Lighthouse that I admired, neither film grabbed me. Eggers’ latest, The Northman may be the filmmaker’s most commercially accessible film to-date. Does that make it a better film? Well, I will say I did like it more than his previous features. Still, there is still plenty of the filmmaker’s unique vision throughout that prevented me from being a fan. Yet, I do feel fans of Eggers will for the most part absolutely love The Northman.

Set in Iceland at the turn of the 10th century, The Northman centers on Prince Amleth (Alexander Skarsgård) who returns to his home years after watching his father King Aurvandil (Ethan Hawke) brutally murdered by his treacherous uncle Fjölnir (Claes Bang). Being a young boy at the time, Arnleth was unable to save his mother, Queen Gudrún (Nicole Kidman) from being his uncle’s new wife. Escaping with his life, the young prince vowed to return, avenge his father, and save his mother.

Amleth is now, not only a full-grown man, but he has lived the life of a Viking. He has become a full-on killing machine. When he sees the opportunity to head back to where he came from, he takes it and uses the guise of a slave to gain access to his uncle’s kingdom. Not recognizing the nephew that he thought was dead, Fjölnir puts Amleth to work. It is here where he becomes a trusted worker and begins to fall in love himself with another slave, Olga (Anya Taylor-Joy).

I will admit that I was really into the first half of The Northman. From the family betrayal to our introduction of the adult Amleth. Eggers had things moving along and the sheer brutality of the Viking village invasions had me really digging where things were heading.  Unfortunately, once Amleth arrives at his homeland and starts sneaking around, causing some trouble, I began to lose interest. I guess for me, while Skarsgård was menacing and effective as what I consider a 10th century Terminator, he is just not that interesting as a character. That’s a problem when we are forced to spend more than two hours with him.

The Northman is in no way a bad film and again, I believe Eggers fans and fans of Viking tales are going to find a lot to love here. It just didn’t fully connect with me.