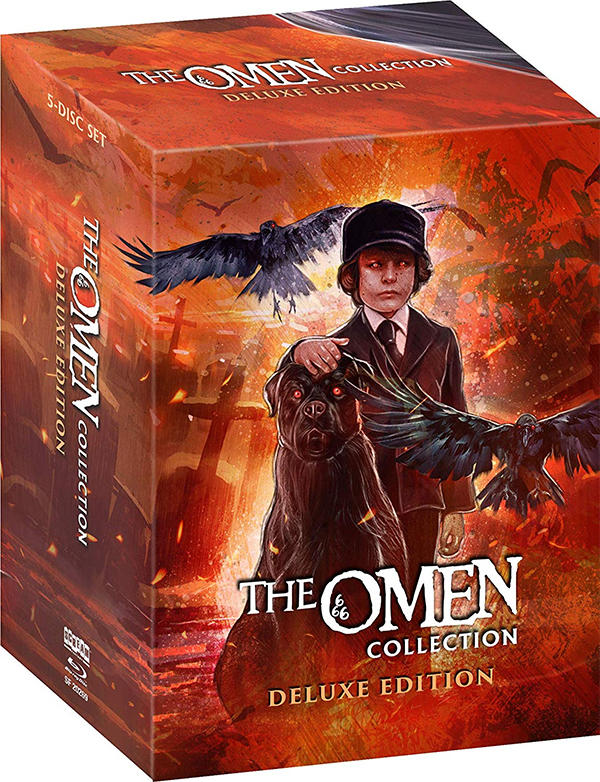 Arriving this week on Blu-ray is the beautifully packaged Deluxe Edition of “The Omen” Collection, courtesy of Scream Factory. Prior to the 1980’s, horror franchises weren’t a big thing. It wasn’t until “Halloween” and “Friday the 13th” spawned multiple sequels that it became a norm in Hollywood. However, in 1976, “The Omen” was a big hit and two years later, the first sequel was released. We would eventually get two more films (one being made-for-TV) and a reboot.  Like many horror franchises, “The Omen” sequels would drop in quality with each subsequent film.

I haven’t watched “The Omen” films since I was a child and truthfully, I don’t recall ever watching “The Final Conflict” before viewing Scream Factory’s set. The new remaster of the original film looks fantastic and should be quite pleasing to the fans. Although the rest of the titles haven’t been remastered, they still look quite good, including the very low-budgeted fourth film, which only has a quick reference connecting it to the previous ones. Since the remake is from 2006, it fares pretty, well with the picture and sound quality but, having re-watched it within 48 hours of the original, I was kind-of shocked how much of it is an exact copy instead of a remake. I will probably get some flack for this, but I do feel Live Schreiber was better suited for the role of Robert Thorn than Gregory Peck.  As for the third film, Sam Neill was its’ saving grace, I just wish the climax didn’t land with a thud.

For fans of the series, Scream Factory’s Deluxe Edition is vastly superior to the one released by 20th Century Fox in 2008, based on its’ content.  Two of the biggest differences between the releases is that unlike the 2008 set, this new edition includes a new 4K remaster of the original 1976 film and it also includes “Omen IV: The Awakening” for the first time on Blu-ray. Those are two major factors when considering upgrading your collection.  Another major difference is the number of bonus features on the five-disk set.  Although, no new additions have been made for the remake, there are plenty of new features for the first four films, as well as some previously released ones. I may not be a big fan of this series, but for those of you who are, Scream Factory has put out a fantastic set that includes plenty of content to keep you busy for hours.