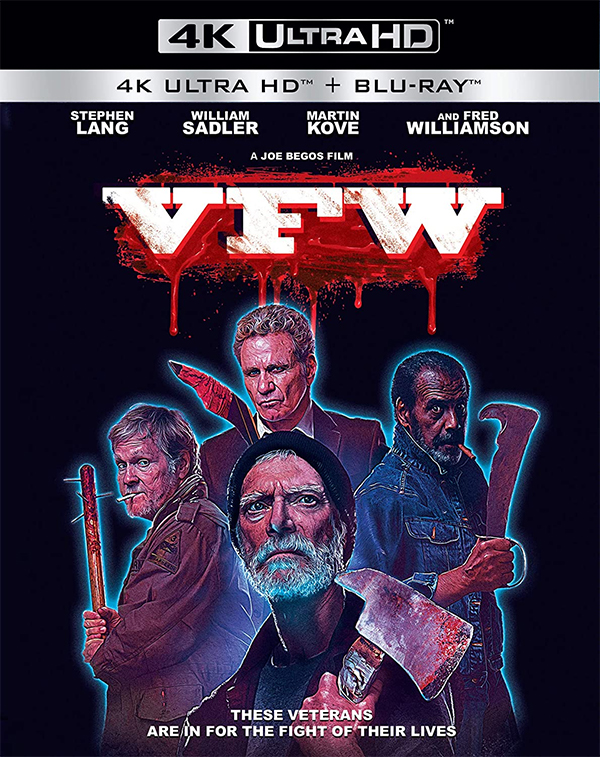 Arriving this week on 4K Ultra HD, Blu-ray and DVD is Joe Begos ultra-fun throwback, “VFW”. Much like how the filmmaker was inspired by Cronenberg’s “Scanners” for 2015’s “The Mind’s Eye”. Begos clearly drew inspiration from the early works of Carpenter for his latest film. When I say inspiration, I in no way mean that he simply remakes earlier films. Begos is able to make each film his own and he is one of the very few filmmakers out there who knows what fans want in a throwback genre film. “VFW” feels like a product of the 80’s and not like something that is simply trying to recreate something from that decade. One of the funny things is that for a long time I have wanted to see a movie where some bad-ass seniors battle the supernatural, however in my mind, the casting would have been something like Gary Busy, James Woods and Nick Nolte, but that might have been too much crazy for one film. Begos casting of Stephen Lang, William Sadler, Fred Williamson and Martin Cove makes a whole lot more sense and it works.

The story follows a group of war veterans who are forced to fight for their lives against a mad drug dealer and his army of mutant junkies who are hooked on his product. Even though the drug turns humans into mindless rage-filled animals, it does make them harder to kill.  Plot wise, “VFW” is pretty much bare bones, but what it lacks in story, it makes up for in character and gore-filled fun. Those who enjoy plenty of blood splatter, will surely find enough here enjoy. Fans of the cast will also get a kick out of seeing them working together on screen. For me, it was nice to see Cove back in action after having a nice little career boost with Cobra Kai. “VFW” isn’t a perfect film by any means, but it delivered just what I was hoping for and I can’t wait to see what Begos brings us next.