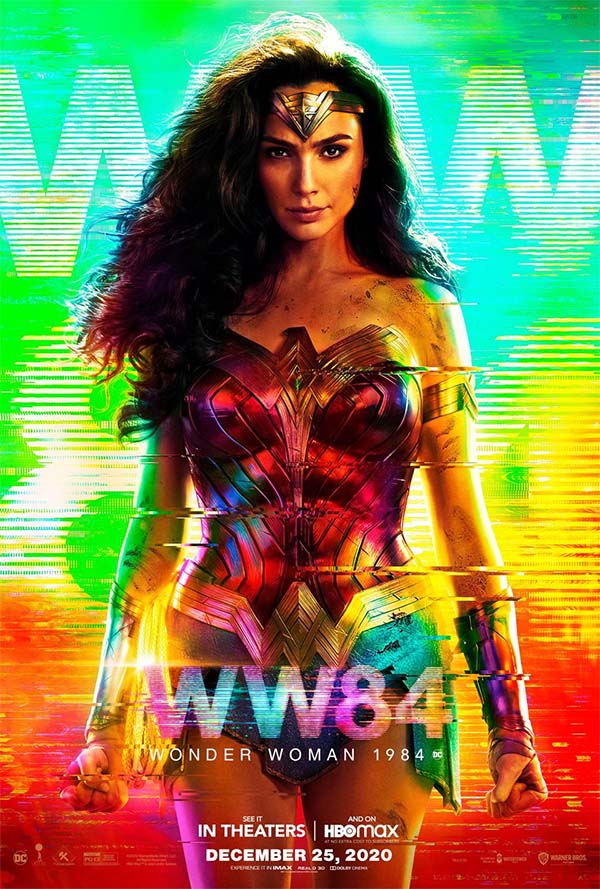 Three years ago, director Patty Jenkins pretty much helped save the struggling DC movie universe with the release of Wonder Woman, which marked the comic book character’s first ever solo feature film. With films like Batman v. Superman and The Suicide Squad getting trashed by critics and comic book fans, Warner Bros must have been thrilled to finally deliver a movie that not only made a killing at the global box office but pleased almost everyone who saw it. Jenkins returns with star Gal Gadot in Wonder Woman 1984, which I am sad to say it’s quite a disappointment.

Set more than sixty years after the events in the first film, we now find Diana Prince living in Washington D.C.  The year in 1984 and the world is a-very-different place than 1918 in which our hero was in the-midst-of World War One. When Diana isn’t at her day job working with artifacts at the Smithsonian, she is helping stop crime around the city. The film’s first big action set-piece takes place in a shopping mall where a group of criminals rob a jewelry store. Wonder Woman swoops in and saves the day. The is easily the sequel’s most enjoyable sequence.

One of the items stolen from the back room of the jewelry store is a mysterious ancient artifact that aspiring businessman Maxwell Lord (Pedro Pascal) wants to get his hands on. The stone winds up at the Smithsonian and Barbara Minerva (Kristen Wiig) has been asked by the F.B.I. to dig up information on it. When Diana reads the Latin inscription on the base of the stone, it says that it has the power to grant any wish. Although Diana doesn’t say her wish out loud, anyone who saw the first film will know what her wish is.  Barbara, wishes to be as strong, beautiful and confident and Diana and of course, we all know what will happen when someone who is angry and has been stepped on their whole life gets super human strength.

Much like many soon-to-be comic book villains, Barbara is a super sweet and kind person, who has serious trouble making friends and has always felt ignored by the people around her. When Diana shows her kindness, Barbara instantly wants to try and have a friendship with her co-worker. The casting of Wiig here was an odd choice to me, and her character is a bit too comical to take seriously, even when she eventually turns bad, it just never seemed to work.

Speaking of villains that just don’t work, Pedro Pascal who has been having a great-few-years with the massive success of The Mandalorian is just not an interesting villain here. He is clearly trying to play a larger-the-life bad guy who wants to chew up the scenery, but the guy basically just wants to own all-of-the oil in the world which would make him the single most powerful human on the planet. That motivation is just boring and feels like something Lex Luthor would want to do.

If there was one thing that I liked most about Wonder Woman 1984 it is how they brought Diana’s love interest Steve Trevor (Chris Pine) back. It made a lot of sense in the narrative. Some of my favorite moments are between the two of them and some of the funniest moments are when Steve is discovering some of the advances in the world, while Diana is just standing back and smiling at his wonder and amazement.

Running at 151 minutes, Wonder Woman 1984 surprisingly has very, little action. 30 minutes could have been shaved off the runtime which would have probably helped things move along quicker due to the lack of interesting characters. Now, don’t get me wrong, this isn’t a terrible film. There are enough enjoyable moments to keep fans entertained and Gadot still makes for a wonderful Wonder Woman. This is more of a watchable letdown.