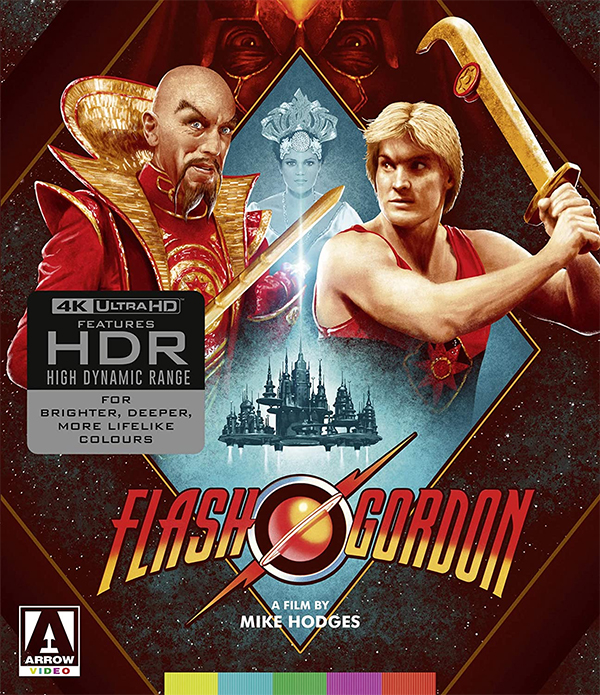 Last month the 1980 sci-fi cult classic, Flash Gordon arrived on 4K UHD in an I must say it is most impressive. Arrow Video without question showed this film the love it so richly deserves on its 40th anniversary.  Let me start off by saying that if you are a Flash Gordon fan like myself, I highly suggest investing in the Limited Edition release of either the 4K UHD or the Blu-ray to make sure you are getting the vast array of bonus content. If you are someone who enjoys all of those extra features, it might be worth the extra cash, as the standard edition Blu-ray release does not include the second disk.

Flash Gordon is unquestionably one of the cheesiest science fiction films to come out of the 80’s and I mean that in a good way. For those who might not know this, George Lucas originally wanted to make a Flash Gordon film but was unable to secure the rights, so he decided to write and direct his own sci-fi serial, Star Wars. Now, I am pretty, sure a George Lucas film based on the classic hero would have been cool, but now we live in a world with both Flash Gordon and Star Wars and I would not change a thing.

For those unfamiliar director Mike Hodges’ film, the story follows football player Flash Gordon (Sam J. Jones), along with Dale Arden (Melody Anderson) and Dr. Hans Zarkov (Topol), who journey to the planet Mongo after earth is attacked by the galactic tyrant Ming the Merciless (Max Von Sydow). Flash and his friends must find a way to stop the evil emperor and save their world from destruction. Flash Gordon has almost everything you would want in an epic sci-fi fantasy made released in the 80’s.  We get cheesy acting, cheesy effects, an army of flying hawk people, our hero on a flying jet ski, Timothy Dalton, oh and did I mention flying hawk people? Yeah, I know I did, but I had to mention them again.

Admittedly, the original Universal Flash Gordon Blu-ray release felt good enough for me at the time. It looked and sounded great and I was more than happy with it. Having now seen what Arrow has put together, this new 4K restoration by Studiocanal from the 35mm camera negative is a vast improvement. The vibrant colors pop off the screen, especially in scenes in which the bright alien sky is used as the background.  The DTS-HD Master Audio 5.1 mix also quite nice, obviously I was turning things up for the opening track by Queen.

The Limited Edition release of Flash Gordon is packed with extras, though the two things that stand out most for me are the collectable booklet and the inclusion of Lisa Downs’ Life After Flash documentary. If you are a fan of the film, I can’t recommend this release enough. 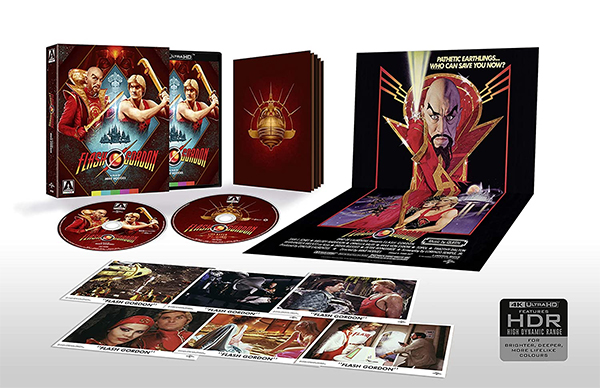