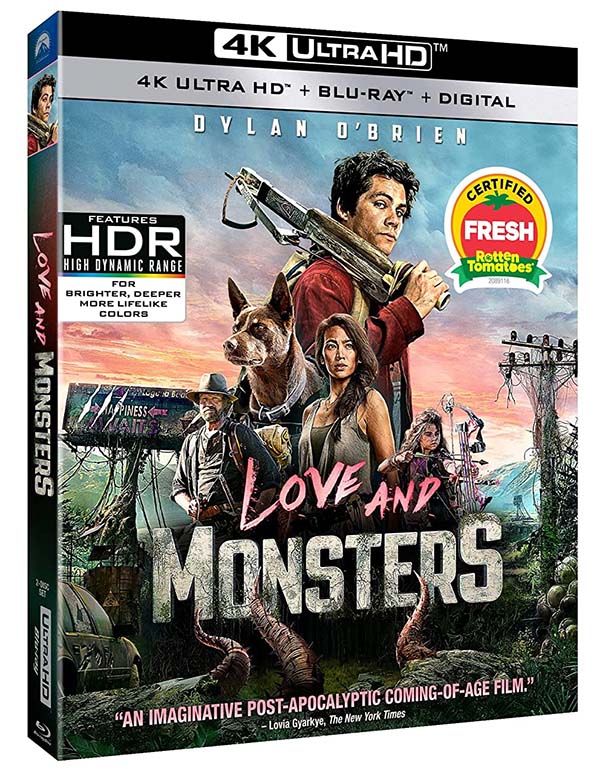 2020 was an interesting year when it came to trying to put together a best and worst films list. That is mainly because there were not a whole lot of notable titles released during 2020 due to the ongoing pandemic. Out of the limited number of new releases I screened during the year, Michael Matthews’ Love and Monsters was my absolute favorite and earned the number one pick of 2020. You can read my review of the actual film, here. Tone-wise, it feels like it fits along nicely with films like Zombieland and Warm Bodies. Two terrific horror comedies with heart. It’s a shame that Love and Monsters didn’t seem to get as much attention when released on VOD in the fall. This week sees the 4K UHD and Blu-ray release and I highly recommend giving it a look.

Love and Monsters makes great use out of 4K UHD Dolby Vision. Because much of the film takes place during the daylight and features quite a few beautifully shot locations including open fields, the forest, and sandy beaches, we really get a wonderous look at the world the character’s and creatures inhabit. This is a stunning film which I wish I had the chance to see on the big screen first. Although there is no Dolby Atmos, the DTS-HD Master Audio 7.1 delivers a great track that lives up to the eye candy. This is especially important when your film features loads of giant fearsome monsters and you want the sound to help project their massive size and damage they cause.

Love and Monsters may not be the most original film of the year but it is by far the one I have enjoyed the most and can’t recommend it enough.