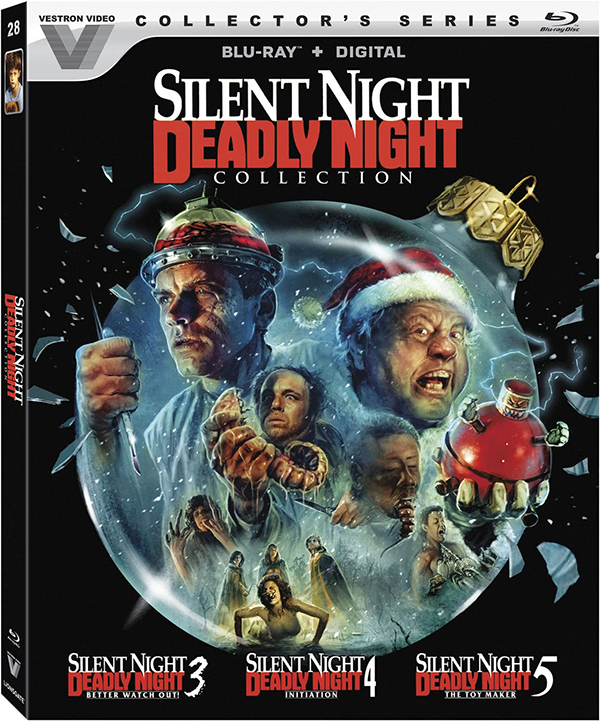 I remember when the original Silent Night, Deadly Night was released in 1984 and it was all over the national news with people protesting it. While most of them had probably not even seen the film, the public hated the marketing materials that showed someone in a Santa Clause outfit with an axe. The film was basically pulled from theaters and wound up getting a VHS release. While the first two films in the series have already received Blu-ray releases, Vestron Video has finally given us the third, fourth and fifth films in HD via the Silent Night, Deadly Night Collection.

1989’s Silent Night, Deadly Night 3 picks up six years after the events in the second film. After being shot down by the police, Ricky (now played by Bill Moseley) has undergone brain reconstruction surgery which has left him in a comatose state. Dr. Newbury (Richard Beymer) is now using Laura (Samantha Scully), a blind teenager with clairvoyant abilities to communicate with Ricky through dreams. The connection between Laura and Ricky awakens the Christmas killer and Ricky uses that connection to follow Laura, her brother, and his girlfriend to her grandmother’s house.

Ricky seems to not get that much attention being outside, especially when he is wearing a clear dome on his head that shows his exposed brain. He even hitchhikes and gets picked up and then of course kills the kind driver. Silent Night, Deadly Night 3 is the only sequel in this set that follows the Ricky storyline which originated in the prior films. This was a bit surprising since the ending leaves things open for a possible Ricky continuation. While this may not be a very good film, it is a drastic improvement over Silent Night, Deadly Night 2. One of the main reasons is because nearly half of the prior film was filled with flashbacks from the first film. We basically only got half a new movie for Part 2. The third film also feels a little fresher when it goes with a more sci-fi route with its’ narrative. I also love that Robert Culp is here playing the detective.

1990’s Silent Night, Deadly Night 4 sees Brian Yuzna behind the camera. This was a wise choice, after helming Society and Bride of the Re-Animator. Even if you look at some of the filmmakers later films like Return of the Living Dead 3 and The Dentist, he has a thing for body horror, which is one of the main elements that work in this supernatural departure from the slasher Santa sequel.  The only connection Initiation has with Better Watch Out is a scene in the film where the characters are watching Silent Night, Deadly Night 3 on the television.

Aspiring journalist Kim Levitt (Neith Hunter) is tired of not being given any juicy assignments at the newspaper. Her boyfriend and fellow reporter Hank (Tommy Hinkley) doesn’t do much to stand up for her at work either, so she takes it upon herself to follow up on a story where a woman fell from a roof while covered in flames. Kim’s investigation leads her to Fima (Maud Adams) a bookstore owner that gifts Kim a book on feminism and the occult. What Kim doesn’t realize is that Fima is trying to initiate the reporter into her coven of witches. The deeper Kim digs, the more dangerous things become for not only her, but those in her life.

For those who were hoping for another Santa slasher picture, that’s not what we get here. There is some cool practical effects work here courtesy of Screaming Mad George.  We also get Clint Howard in a fun role. Each film in this collection has a fun casting choice. For me Howard is it here and Robert Culp in Better Watch Out.  The final film in the series, The Toy Maker has Mickey Rooney. Silent Night, Deadly Night 4 might be the most interesting film in this collection.

While Yuzna didn’t return to direct, Silent Night, Deadly Night 5, Friday the 13th Part III writer Martin Kitrosser stepped in. Neith Hunter, Clint Howard Conan Yuzna returned for this fifth film, they are each playing completely different characters as The Toy Maker has no connection to Initiation. Kind of like how Return of the Living Dead Part II brought back actors to play different characters. While I do feel Initiation is the better film, The Toy Maker might be more fun.

Derek (William Thorne) was eagerly awaiting Christmas, until he saw a toy that way mysteriously left for him kill his father. Two weeks later Derek hasn’t spoken a single word and his mother Sarah (Jane Higginson) is very worried.  We come across different individuals throughout the film that may not be who they seem. There is Noah (Tracy Fraim), a mysterious stranger who is not only following Sarah and Derek, but he is also staking out a local toy store run by Joe Petto (Mickey Rooney) and his son Pino (Brian Bremer).

The toys that come from Joe’s store have been rigged to harm people, mainly children, but who is doing it? It is Joe or Pino? The final act in The Toy Maker is completely ridiculous but also probably the most entertaining 20 minutes in the entire Silent Night, Deadly Night franchise.

All three of the films featured in this collection were direct-to-video sequels and not a whole lot of time were put into things like lighting and various other things. However, these new 1080p transfers are the best these films have ever looked. I would say Initiation has the best presentation because there is more natural light throughout the film due to numerous outdoor daytime shots. Each of these films come with adequate 2.0 DTS-HD Master Audio track that does the job.  If you are a fan of the series, Vestron has put together a set that is sure to please the Silent Night, Deadly Night lovers.