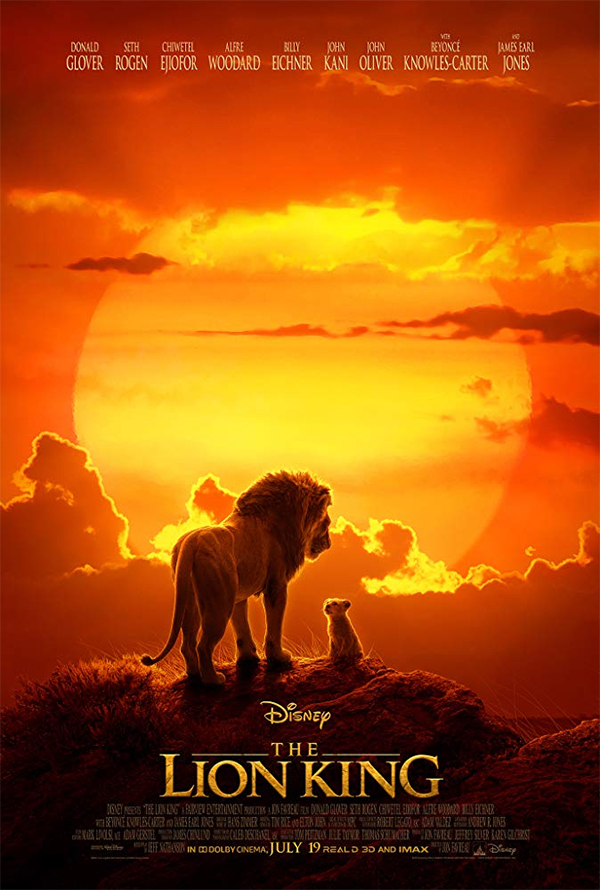 When it comes to Pixar and Marvel, Disney is absolutely owning the multiplexes. Not only are the films usually loved by critics and audiences alike, but they make tons of money for the studio. I have questioned Disney’s desire to do live-action remakes of their biggest animated films, but even more so, their need to rush them out one after another.  With the-exception-of the recent “Aladdin” remake, most of the updated versions have been unremarkable to say the least.

If you have seen the 1994 original, then you know the story.  After thinking he caused the death of his father Mufasa, young Simba runs away from home, leaving his evil uncle Scar to rule over the land. While Simba grows up in a beautiful paradise with his new friends Pumbaa and Timon, his mother and the rest of the lions are suffering under the rule of Scar and his hyena friends. It isn’t until Simba’s childhood friend, Nala finds the lion prince and brings him home to face Scar. Not a single element of the story has been changed, however the actors who have been cast to voice the characters in the new version are more politically correct. .  I love Chiwetel Ejiofor. He is a brilliant actor and does a pretty good job voicing Scar, but his voice lacks the menace that Jeremy Irons delivered in the original. Very few actors have a voice as commanding as Irons. Thankfully James Earl Jones once again voices Mufasa. Even Disney knew that there isn’t a single voice out there that can replace Jones’. The rest of the cast is good. Although Billy Eichner gives it his all as Timon, it is hard not to miss Nathan Lane.  Seth Rogen on the other hand is perfectly cast as Pumbaa.

So how does “The Lion King” update fare? Well, I would be lying if I said it wasn’t one of the most beautifully animated films I have ever seen. Yes, it may look like live-action, but it is fully computer animated. The problem is, it feels totally unnecessary. This is essentially the same movie we got in the 1990’s, minus the fun and wonder. Even the songs were more memorable in the original. The heart and soul feel almost non-existent. The characters may look real, but they don’t feel real. I didn’t dislike the latest version of “The Lion King”, but I can’t fully recommend it either. If you want to see a mildly entertaining visual spectacle, then I suggest playing a little extra and seeing it on the biggest screen possible.  I would just like to see Disney slow down on these remakes and give us something original (that they can remake in another 20 years).