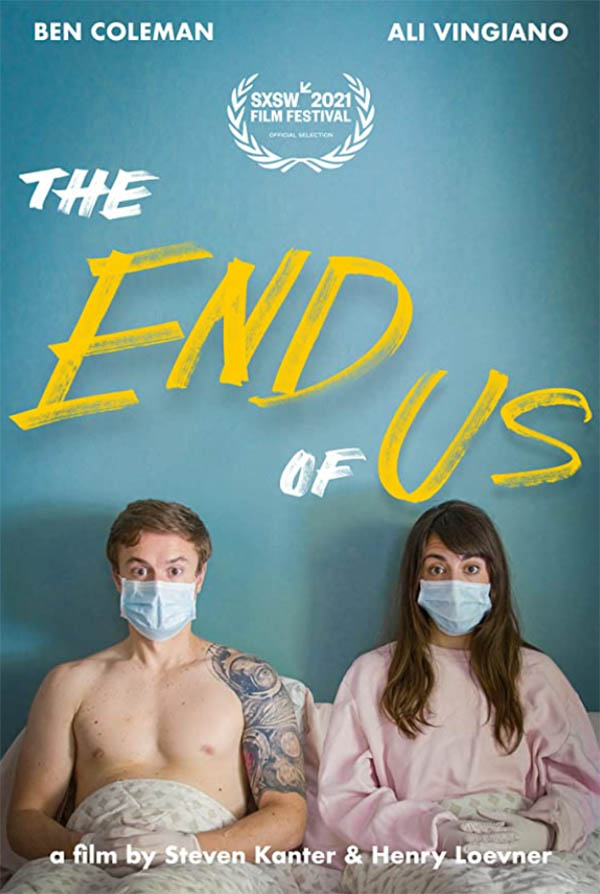 It was pretty-much guaranteed that in 2021 we would be seeing feature films set during the currently ongoing pandemic make their way through various film festivals. A film centered on relationships during quarantine would obviously be the most relatable and this is where The End of Us fits in. This is a first-of-its-kind collaboration from various Buzzfeed alumni. If you are a fan of Buzzfeed, you are sure to recognize the film’s cast.

The story kicks off just over one year ago on March 10, 2020. Leah (Ali Vingiano) enters her home after a full day at work, and her boyfriend, Nick (Ben Coleman), pesters her into reading lines with him for an audition. When Nick decides to skip the audition, Leah is finally fed up and tells him she wants to break-up. Well, the timing couldn’t be any worse, because the pandemic has just become a reality to the public and now are on strict stay-at-home orders. This means that none of Nick’s friends will allow him to stay with them due to pandemic and since he is unemployed, he can’t afford a place of his own. Because Leah is a genuinely nice person, she won’t kick her ex out, but he does have to sleep on the couch.

With Leah now working from home and Nick pretty much just doing whatever he likes and not being very safe when leaving the house, the two wind up getting on each other’s nerves. There are moments of civility and even long stretches of them still enjoying each other’s company, but Leah does get stressed out about the situation. Things get even worse when she loses her job and they are both at home and out-of-work. It doesn’t help matters when Leah becomes interested in her former co-worker, Tim (Derrick Joseph DeBlasis). This makes Nick pretty jealous because he believes he has a chance at getting back together with Leah.

The End of Us is the feature film debut for co-writers/directors Steven Kanter and Henry Loevner and going into it I wasn’t sure I really wanted to watch a quarantine-set romantic comedy. To my surprise, there is quite-a-bit of cleverness on display here and a couple of unsuspecting turns in the narrative that kept my interest. This is a film in which characters do get COVID and allows its characters to grow in a somewhat believable ways. Something we don’t see often in the genre. Yes, at times, The End of Us is too cute for its’ own good but both Coleman and Vinigiano have good on-screen chemistry, even when they are at each-other’s throats. If you are going to watch a film that will remind you just how terrible the last twelve months have been, at least The End of Us allows you to do it with a smile.